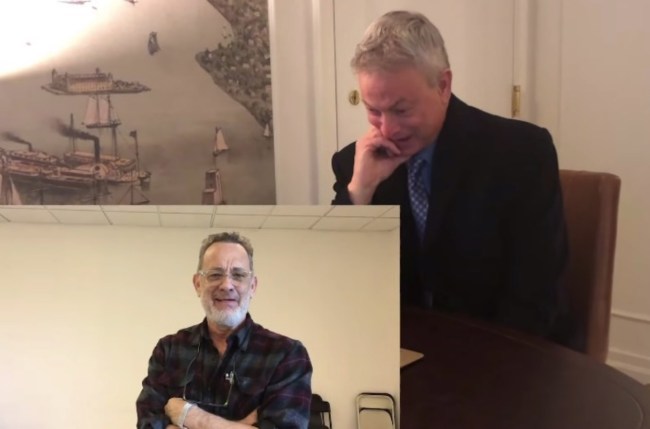 Question: Why am I crying in the club right now?

Answer: This emotion clip of actor Gary Sinise who played Lieutenant Dan Taylor in Forrest Gump and created the Gary Sinise Foundation which supports active-duty servicemen and women, veterans, first responders + their families + caregivers, and others in need.

I didn’t expect to get choked up first thing in the morning today but here we are. Let me set the stage for you a little bit…Few people on this planet are as actively involved in supporting the troops as Gary Sinise. As you’ll see in the opening portion of this clip, Gary Sinise is pretty much ALWAYS involved with USO events performing with the Lt. Dan Band.

For his humanitarian work with the troops, Gary has been named an honorary U.S. Navy Chief Petty Officer (August 2012) and he was named an honorary Marine by the Commandant of the Marine Corps in August 2013. Each year, his foundation raises more than $30 million for the troops and a large portion of that goes toward building smart homes for the disabled.

Here, Gary is asked to sit down and watch a clip. He has no idea what’s about to happen. And we get to watch him react to his colleagues, celebrities, actors and actresses, first responders, Generals, and countless people whose lives he’s touched thank Gary for the meaningful impact he’s had on their lives.

The last person to speak is Gary’s Forrest Gump co-star Tom Hanks and there’s a quote from the film below that I think fits perfectly here.

I love that they slipped Tom Hanks in there as the last person even more after coming across this quote from Forrest Gump over on a Reddit thread:

Lt. Dan Taylor: “Forrest. I never thanked you for saving my life.”

Forrest Gump: “He never actually said so, but I think he made his peace with God.”

Gary truly seems like one of those people who makes everyone around him want to be a better person because he’s genuinely that good of a person.

Here are the people featured in that video, some of the biggest names on the planet taking time to pay tribute to Gary:

To learn more about the Gary Sinise Foundation, the work they do, and how you can get involved yourself you can visit their website here.