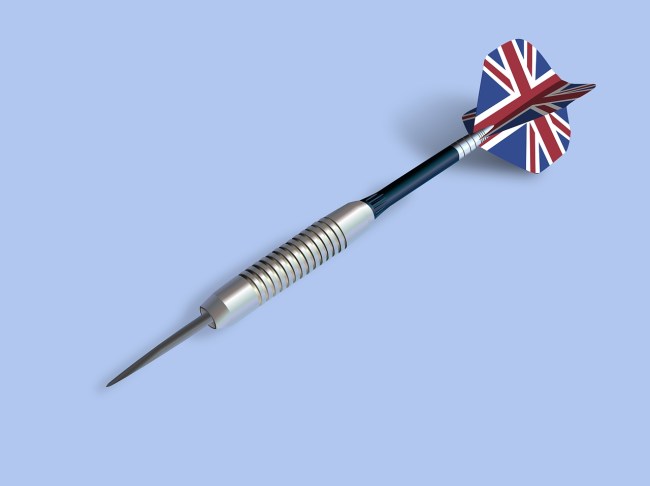 I don’t think you need my opinion on whether gender reveals are a cute way for parents to find out if they’re having a boy or girl or if gender reveals are one of the absolute dumbest creations of modern parenting. My opinion doesn’t matter here at all, I’m just here to report the facts on this truly brilliant gender reveal below.

This clip shared on the NYPost shows a gender reveal fail which apparently took place a year or two ago. In this footage, we see the mother-to-be throwing a dart through a balloon to reveal pink confetti thus revealing that a baby girl is on the way. In the background, we see her sister in a black dress filming the reveal.

What’s wild is we don’t see the sister suddenly hit the ground and scream out in pain. She is an absolute trooper. It’s hard to tell but the pointy metal dart goes straight through that balloon and sticks into her leg like she just got hit with a spear in battle. We don’t see that until the next moment when the footage jumps to her struggling with the projectile in her leg.

If you are the type of person who doesn’t want to see a dart stuck in someone’s leg you might want to turn away now. Though I’d question why you clicked on this article to begin with given that it’s all right there in the headline. Anyway, here’s one of the most boneheaded gender reveals ever filmed:

The person who shared this clip on TikTok is the sister and she was the one who planned this baby shower for her sister. All things considered, it’s actually a phenomenal video clip. I just question why there was a gender reveal party to begin with when being surprised is the infinitely better option:

Fernandez, who shared the graphic clip on TikTok last month, told Newsflare that her family had insisted on throwing the party, but her brother-in-law insisted the stunt had to be “something cool.”

“So we decided on real darts and a huge balloon. His idea, not mine!” said Fernandez, whose baby shower blunder was viewed by over 4.5 million people on the video-sharing platform.

“Long story short,” she said, she positioned herself in the best spot to film the reveal and reaction. Unfortunately, she failed to anticipate the dart-to-bullseye trajectory.

“Never in my wildest dreams did I expect the dart to go straight through the balloon and into my foot,” she said. (via NYPost)

The entire thing has me thinking about that Old School moment where Sean William Scott is telling Will Ferrell he has a dart stuck in his neck. It’s all so perfect. In fact, maybe I’m pro-gender reveal now that I’ve seen this if it means there will be more clips like this in the world.