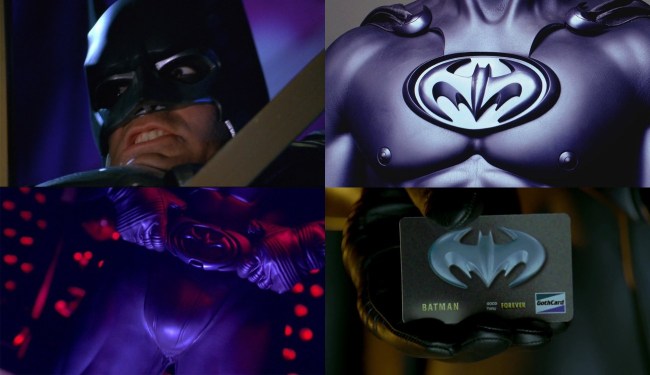 Ahhhhh, Batman & Robin. Truth be told, it was actually quite formative for me as a kid, as I was born in the year 1993, the same year that Batman: The Animated Series debuted and just a few years prior to the ill-fated Batman Forever and Batman & Robin. The thing is, though, as a kid that’s barely even 10-years-old yet, you don’t know how good or bad a movie is — you just know that Batman is in it! That’s all that mattered at the time, and as a result, I’ve likely seen this movie more than I care to admit. Plus, Bane used to scare the crap out of me when I was just a little fella, so it sticks in the mind more than most movie memories.

Obviously, in the years since, I — like everyone else who’s laid eyes on the film — have come to realize how truly awful it is. The film is so bad, in fact, that George Clooney himself is perhaps the biggest critic of Batman & Robin, seemingly lampooning it every chance he gets.

During an interview at the premiere of his new Ben Affleck-starring film The Tender Bar, Clooney revealed that his wife Alma Clooney still hasn’t seen Batman & Robin so she’s able to still “have respect” for him.

“They didn’t ask me [to return as Batman in The Flash],” Clooney told Variety. “When you destroy a franchise the way I did, usually they look the other way when The Flash comes by.”

“He won’t let me watch it,” Clooney’s wife Amal chimed in, with Clooney adding: “There are certain films I just go, ‘I want my wife to have some respect for me.’”

Don’t expect to see George Clooney’s take on Batman in the upcoming “Flash” crossover movie: “They didn’t ask me. When you destroy a franchise the way I did, usually they look the other way… I did have great nipples. It was winter all the time.” https://t.co/TSDj1x7oD8 pic.twitter.com/Sbjp1OeE8u

Clooney’s comments came the same night that Affleck — who stars in Clooney’s latest directorial effort The Tender Bar, which hits theaters on December 17 — discussed how much he enjoyed returning to the cape and cowl of Batman in The Flash following his tumultuous experience on Justice League:

“It was a really nice way to revisit that as the prior experience had been difficult. This was really lovely. Really fun, I had a great time,” Affleck told Variety. “I’m probably under some gag order that I’m not even aware that I probably just violated and I’m now going to be sued,” he then joked.

Affleck will return as the Dark Knight when The Flash hits theaters on November 4, 2022. As for Clooney, you’re probably more likely to find him doing a stand-up routine about Batman movies than actually suiting up for one.