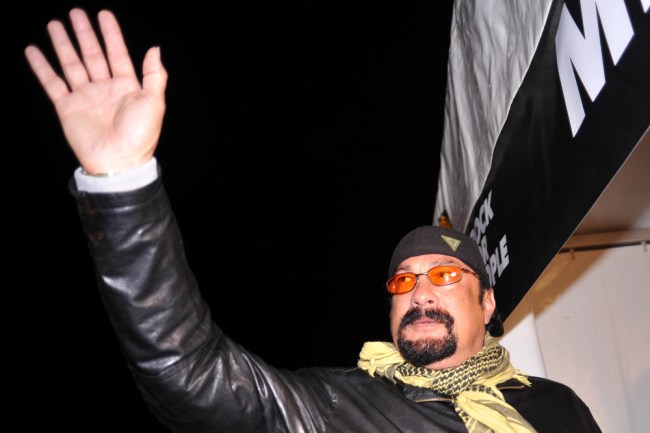 Out of nowhere yesterday, boxing legend George Foreman challenged Steven Seagal to a fight. George issued the challenge on Twitter, and as you can imagine everyone lost their dang minds. Yesterday was one of the darkest days in American history, but George Foreman challenging Steven Seagal to a fight gave some people a few moments to make jokes in an otherwise humorless world.

Steven Seagal has been grabbing headlines yesterday. He appeared in an interview on Good Morning Britain where the byline described him as ‘Vladimir Putin’s friend’, and Steven went on to say that he’d ‘risked my life countless times for the American flag’. Apparently, Steven’s completely oblivious that the acting he did back in the 1980’s was fake, and he’s living in a fantasy world in Russia now.

Is that the reason George Foreman challenged Steven Seagal to a fight? We really don’t know. Here’s how it all started:

Steven Seagal, I challenge you One on one, I use boxing you can use whatever. 10 rounds in Vegas pic.twitter.com/tTy7Qo4zHF

As I mentioned above, Twitter had a field day with George Foreman’s tweets.

Me: when the fight ends and Steven is destroyed pic.twitter.com/gCKKEuu7O2

In all fairness, seagal is probably 2 busy plotting the earth's imminent destruction pic.twitter.com/WAAx9Wlco8

What form of combat should Steven Segal use against George Foreman?

Has anyone told Steven Seagal that he’s become the laughing stock of the world? I feel like someone needs to let him in on this joke. The man’s entire persona has unraveled. He’s no longer a successful actor, he’s just some crazy ass living in Europe, spewing venom, and eating carrots.