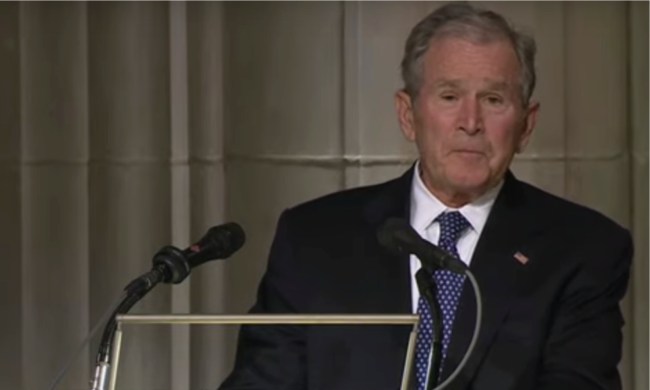 Today, the United States laid to rest former President George H.W. Bush, who passed away over the weekend at the age of 94. Like any memorial service, especially one of a former Commander In Chief, world leaders, both former and present, filled the room to pay condolences to the Bush family, which is one of the most prominent political families this country has seen.

As former Presidents like Barack Obama, Bill Clinton and our current leader, Donald Trump, sat in the front row to pay respect to one of their own, another former U.S. President and son of the George H.W. Bush, George W. Bush, stepped to give a eulogy about his father. Man, I’m just going to stop even trying to describe it and just let you watch, because it’s going to leave you with all the feels. Hell, it legit did give me chills.

George W. Bush has given powerful speeches to an entire nation during some of the most difficult times, including September 11th and the financial crisis. He tried to lead with class, dignity and confidence. And, in a powerful display of emotion, while talking about George H.W. Bush, Dubbya wasn’t a former world leader or influential past President, he was a son saying goodbye to his dad. It really was an awesome display of emotion.

George H.W. Bush’s final words were to his son on Friday night, a source close to the Bush family says.

George W. Bush was on speakerphone to wish his father goodbye, and told him that he had been a “wonderful dad” and that he loved him.

It’s believed that George H.W. Bush’s final words before he passed away were simply, “I love you, too” to his son, George W. Bush, and this is one of those moments when, just for a moment, a man expected to robotically stand strong, let down his guard. And, personally, it was pretty cool to see. RIP, George H.W. Bush.