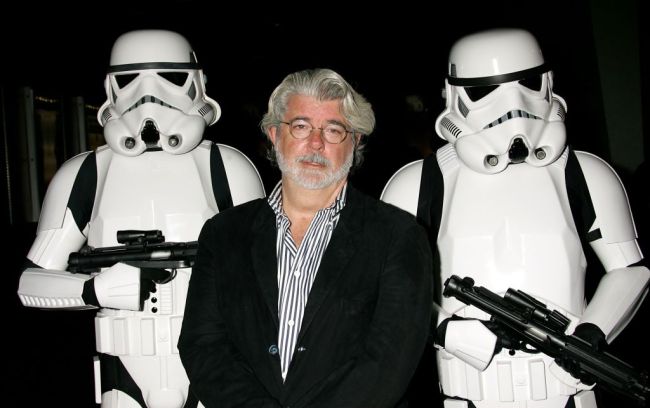 Over the last few weeks, excerpts from the new book The Star Wars Archives 1999-2005 have been released, with the latest revealing that Lucas believes the vitriol towards the dialogue in The Phantom Menace, Attack of the Clones and Revenge of the Sith is not due to his shortcomings as a writer, but because the audience — you and me — just simply weren’t smart enough to keep up. Our bad, George!

“It is presented very honestly, it isn’t tongue-in-cheek at all, and it’s played to the hilt,” Lucas said of the Attack of the Clones dialogue. “But it is consistent, not only with the rest of the movie, but with the overall ‘Star Wars’ style. Most people don’t understand the style of Star Wars. They don’t get that there’s an underlying motif that is very much like a 1930s Western or Saturday matinee serial.” [via IndieWire]

Ah, you see, that’s clearly our mistake: because something is an apparent homage to some obscure pop-cultural touchstone from decades ago, it can’t be bad! Whoops!

The core-shaking cringeworthiness of the romance scenes is well worn, so there’s no need to rehash quotes like “my heart is beating, hoping that kiss will not become a scar” or the infamous “no, it’s because I’m so in love with you” again.

Instead, what I decided to do — for the first time in my life — is watch Attack of the Clones to find out for myself. I’m 27 now and I’ve seen literally every Star Wars movie from start to finish except this one. Why? Because its reputation has been so deeply awful for, quite literally, half of my existence, that I’ve never felt the need. But because of George Lucas’ patently absurd commitment to defending the clearly terrible prequel trilogy inspired me to do some investigative reporting myself. And my conclusion was that Attack of the Clones is not only a terrible movie, but it’s a truly grueling visual and auditory experience, as it’s quite literally difficult to look at (stunningly outdated CGI) and listen to (cardboard and cringey dialogue galore). It is, without question, the worst Star Wars movie ever made, and that’s perhaps evidenced in the quote below, which is the moment that Anakin Skywalker reveals to the love of his life that he just murdered a whole bunch of people.

“Someday I will be [all powerful]. Someday I will be. I will be the most powerful Jedi ever. I promise you. I will even learn to stop people from dying! It’s all Obi-Wan’s fault. He’s jealous! He’s holding me back! I killed them all. They’re dead. Every single one of them. And not just the men. But the women. And the children too. They’re like animals and I slaughtered them like animals. I hate them!”

Real Shakespearan stuff there, George. Look, this man is undoubtedly an American filmmaking icon, but his inability to just admit that the prequel trilogy was far below the standard he set with the original trilogy is hubris in its purest form.