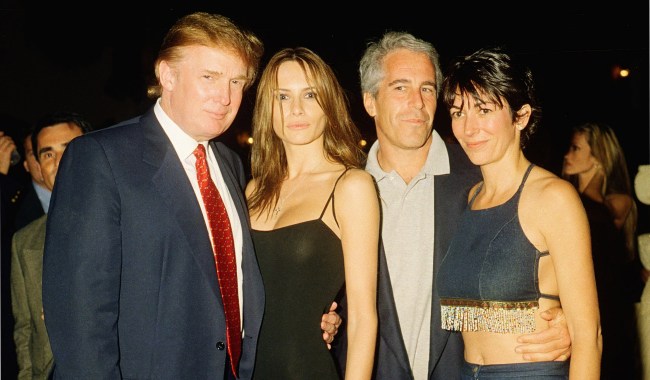 Ghislaine Maxwell, the close confidant and one of the alleged main people who helped procure underage women for Jeffrey Epstein and his friends, is not only reportedly prepared to “name big names” in an effort to save her skin, she also reportedly is in possession of a secret stash of all of Epstein’s sex tapes involving numerous high profile people.

Maxwell, 58, was taken into custody last week on federal sex abuse charges and two counts of perjury while hiding out on a million-dollar 156 acre property in rural Bradford, New Hampshire.

TV host and journalist Christopher Mason, who has known Maxwell since the 1980s, told the Daily Mail after her arrest that it’s just a matter of time before the tapes come out and other people involved in the sex ring begin to get named.

“Ghislaine has always been as cunning as they come. She wasn’t going to be with Epstein all those years and not have some insurance,” Mason said.

“The secret stash of sex tapes I believe Ghislaine has squirreled away could end up being her get out of jail card if the authorities are willing to trade. She has copies of everything Epstein had. They could implicate some twisted movers and shakers.

“If Ghislaine goes down, she’s going to take the whole damn lot of them with her.”

The New York Post also reports that Maxwell has been moved from the Merrimack County House of Corrections in New Hampshire to Brooklyn’s Metropolitan Detention Center and those in charge want to make sure that she doesn’t meet the same fate as Epstein who allegedly hung himself in his cell and avoided prosecution.

Related: Elon Musk’s Ex-Wife Denies Being Hand-Chosen By Ghislaine Maxwell To Be His ‘Child Bride’

They also want to make sure Maxwell isn’t the victim of any attacks while in prison due to the nature of her alleged crimes.

“Those involved in sex crimes against children are generally hated and have to group together so they don’t get jumped,” an insider told the Post.

Whether Maxwell is allowed out on bail has yet to be determined, but Mason believes she will do anything to avoid being locked up for a lengthy period of time.

“Not only did Epstein like to capture himself with underage girls on camera – he wanted to make sure he had something to hold over the rich and powerful men who took advantage of his sick largesse,” he told the Daily Mail.

“I’ll bet anything that once it comes out that Ghislaine has those tapes these men will be quaking in their Italian leather boots.

“Ghislaine made sure that she socked away thumb drives of it all. She knows where all the bodies are buried and she’ll use whatever she had to save her own ass.”