Giant Sinkholes In Mexico, Australia And India Are Swallowing Cars, Dogs, And If We’re Not Careful, People 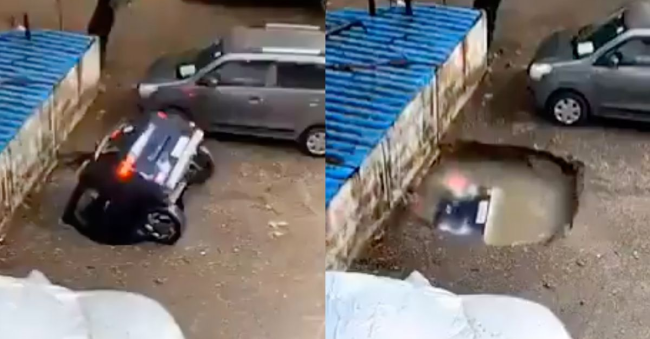 Now the sinkhole is larger than a football field and is beginning to swallow a house and has already trapped two dogs in its gaping maw.

In the fishing town of Robe on South Australia’s Limestone Coast, a sinkhole appeared overnight on a coastal trail at a popular tourist destination. Officials in the area have had to issue warnings to residents and visitors that getting too close to it could mean being “sucked out into the ocean.”

This past Sunday, a sinkhole in a parking lot at a residential complex in Mumbai, India, went viral for how it very specifically swallowed up an entire Hyundai Venue after some heavy rain in the area.

67-year-old Dr. Kiran Doshi, the owner of the Hyundai that was sucked underground, was the one who recorded the video of his car slowly vanishing into the earth. Apparently, the building was constructed over a well that supplies water to another building, according to residents.

Authorities told The Indian Express, “We removed the water from the well using pumps and after we spotted the vehicle, we lifted it with the help of a crane.”

“Half of the well was covered with the concrete portion, while a part of it was kept open,” said Dr. Doshi. “Everyone parks cars there, and this is the first time that a portion of it caved in.”

Many people were initially concerned that there was someone inside the car as it was slowly sucked into the ground. There wasn’t.

That, however, could happen to anyone who ventures too close to the giant 40 foot wide sinkhole that opened up near the red and white Robe Obelisk in southern Australia.

“Waves are actively scouring the area beneath the hole and it is still collapsing,” warned the District Council of Robe on Facebook.

“There’s no warning when these things give way,” said James Holyman, a chief executive for the District Council of Robe. “You don’t get a warning. If that area drops it just happens.”

Patrick Hesp, a coastal studies expert at Flinders University, said sinkholes like the one in Robe, are “virtually instantaneous” when they collapse.

“Sometimes you do see cracks developing before that happens,” he said. “But in the sandy soils that are in this region, it is pretty hard to even spot the cracks if they are present.”

The large sinkhole that appeared in Mexico, however, has taken its sweet time with its growth as it first appeared several weeks ago.

On Thursday of last week, the government of the central state of Puebla said it had rescued two dogs named Spay and Spike that were traped in the over 400 foot wide sinkhole, reports the Associated Press.

The dogs had reportedly been trapped on a ledge with a 50 foot drop for about four days.

Because the loose soil at the edges keeps collapsing into the water at the bottom of the pit, for days it was considered too dangerous to try to rescue the animals.

But on Thursday a firefighter descended into the pit, in part by using a ladder to steady the soil on the edge. His colleagues were seen standing farther back using ropes and a pulley system to haul up cages carrying the two dogs.

The sinkhole is also on the verge of swallowing up a house.

The sinkhole appeared dramatically in late May, and has since continued to slowly grow larger each day.https://t.co/pxDZUF53aW

“It’s a very hard time for us. It hurts, because this is all that we have,” said Magdalena Xalamigua Xopillacle, the owner of the home. “At times we feel sick from so much sadness.”

Naturally, a scene such as this is drawing its share of lookie-loos, just like the mole people had hoped would happen.

The Mexican government has sent in soldiers to keep people 2,000 feet away from the edge of the sinkhole, has set up metal barriers and police tape, and has restricted flying drones over the hole.

“This is not a tourist attraction, or a place to visit with your family,” said the national civil defense office for the area.