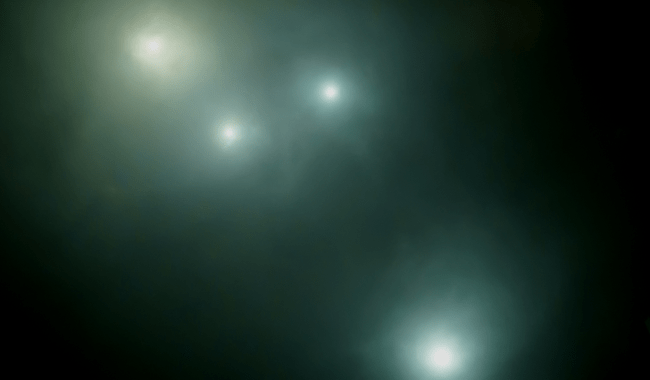 People in Florida just roll differently. This we know. I mean, we do have a whole cache of stories under the hashtag #WTFlorida, after all.

I guess when you regularly see and hear about things like 18 foot long pythons eating alligators and people getting stabbed by a 100 pound sailfish WHILE THEY ARE IN A BOAT not much fazes you anymore.

That’s the only explanation I have for why when a humongous UFO appeared in the sky over Orlando, Florida recently everyone just carried on about their business like nothing was happening.

“I had to come online because I want y’all to see this,” TikToker @ChivonneSayWhat says while shooting video of the UFO. “I’m not trippin’.

“So apparently yesterday in Orlando, or in central Florida, you could hear a loud boom from five-something in the morning all the way from Jacksonville to Orlando.

“This is what they say. It came from Jacksonville to Orlando yesterday. There was a loud boom at 5 a.m. and they say it was some kind of spaceship that landed that was in orbit for like 909 days that landed secretly that don’t nobody know about at the Kennedy Space Center.”

Okay, she’s got her stories mixed up. The U.S. military did recently have a secret space plane in orbit for a record 908 days that returned to Kennedy on Nov. 12. What it was doing up there is a whole other mystery, but it isn’t related to this. That doesn’t take anything away from what she recorded in Orlando, however.

Back to her story.

“You gotta innerstand everybody dont see what you because they are not vibing high they vibrating at a low frequency so that why they can’t see,” one viewer commented.

It has been theorized that the same thing happens with people who see Bigfoot and the Loch Ness Monster.

The TikTok account that shared the video, @master.xebula, wrote, “Real footage caught on Instagram live of a ship/sham in Orlando, FL!!!! They are here and they don’t care no more on revealing themselves slowly but surely to the public.”

He’s certainly not wrong there.

Take a look at some of her UFO video below…

@master.xebula REAL FOOTAGE CAUGHT ON INSTAGRAM LIVE OF A SHIP/SHAM IN ORLANDO, FL !!!! THEY ARE HERE AND THEY DONT CARE NO MORE ON REVEALING THEMSELVES SLOWLY BUT SURELY TO THE PUBLIC👁 ♬ original sound – MASTER XEBULA✍🏾❤️‍🔥