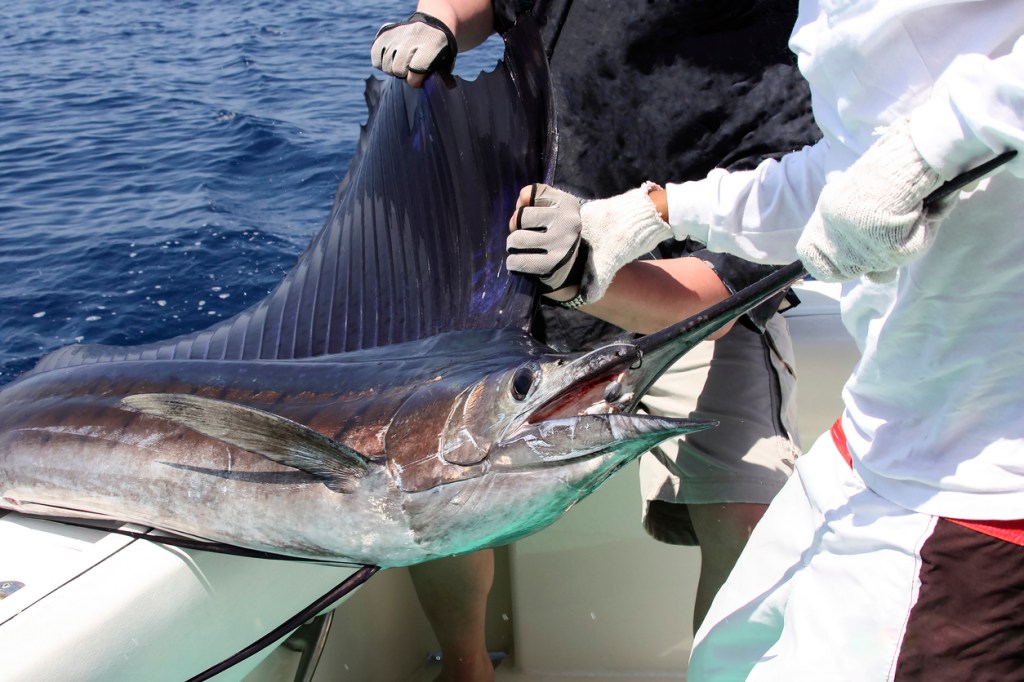 A Maryland woman on a fishing trip in Florida was rushed to the hospital after suffering a freak injury. While fishing out of Stuart, Florida with two others, the 70-year-old woman was stabbed in the groin by a sailfish after it leaped out of the water, into the boat, and stabbed her with its sharp bill (rostral bone) made of solid bone.

According to reports, it all happened so fast she “did not have time to react” and before anyone realized what happened the wound was gushing blood and they were booking it to the hospital. She and another person on the boat applied pressure to the wound to stem the bleeding until they could get there.

Sailfish are incredible predators. They’ve been clocked at speeds of up to 68 MPH. And they often feed in coordinated schools like the video below allowing them easier take down a massive bait ball. However, awesome predators as they might be, it’s not uncommon for enormous Blue Marlin to eat sailfish…

Jordan Mendoza of USA Today writes the group was fishing about 2 miles off of Stuart, Florida which is considered by some to be the Sailfish Capital of the World due to the favorable water conditions. Typically, when fishing for Atlantic Sailfish in South Florida the ‘sweet spot’ for catching them is 100 to 200 feet of water.

That tends to be the ‘sweet spot’ because Sailfish are often chasing ballyhoo, a baitfish, which also stick to that general depth on Florida’s East Coast. And what makes Stuart, Florida the Sailfish Capital of the World to some is how quickly the water gets deep.

The water depths off Stuart, Florida range from around 80 feet to 250 or 300 feet deep within 2 to 5 miles of shore. So boats don’t have to run far at all to find the sailfish and fishermen also have a large area to fish for them so it’s not too crowded to fish, although it can get pretty crowded with weekend warriors.

And while many claim Stuart, FL is the Sailfish Capital of the World, it’s worth noting that Atlantic and Indo-Pacific Sailfish are divided into two separate species. The IGFA Fishing World Record for Atlantic Sailfish is a 142 lb 6 oz fish caught in Lobito, Angola in 2014.

Overall, the Atlantic species tend to be smaller than the Pacific and a 100-pound Sailfish in Florida would be pretty massive. The fishing world record for Pacific Sailfish was a 221 lb 0 oz fish caught in Santa Cruz Island, Ecuador back in 1947. And for my money, these days Guatemala is the Sailfish Fishing Capital of the World due to size and sheer numbers. You can catch 50 of them on a good day and they’re bigger than their Atlantic counterparts.

What is the bill on a billfish made out of?

This woman was stabbed in the groin by an Atlantic Sailfish estimated to weigh around 100-pounds. That bill, also known as the rostral bone, is a remarkable tool billfish use to catch prey. They can use it to stab prey and stun it by smacking it. And a 2014 study found that billfish are actually able to repair damage to their sharp bills in a healing process that “is orchestrated by osteocytes.”

The bill on a billfish is crucial to their ability to catch prey, so it makes sense they’d gain the evolutionary advantage of being able to repair it.

As for the Atlantic Sailfish Capital of the World… Stuart, Florida claims that title but really that entire stretch of South Florida is as good as it gets. From Islamorada on up to Stuart you can find Sailfish in HUGE numbers during the Winter. I actually caught my first sailfish about 30 miles away from where this woman was stabbed in the groin.