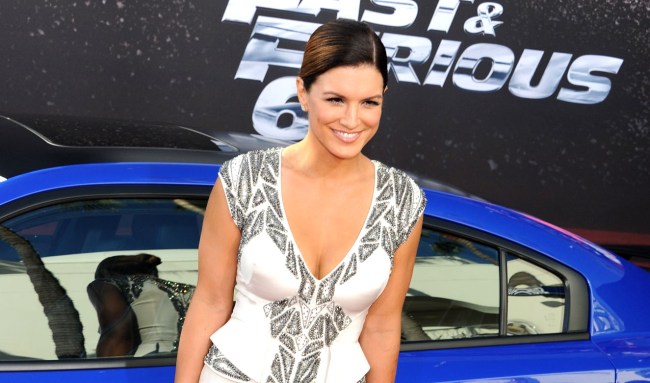 Gina Carano may now be best known as that actress on The Mandalorian who was also in Deadpool, Haywire, and Fast & Furious 6, but oldhead fight fans knew about her way before that as arguably the first face of women’s MMA.

After going 12–1–1 in Muay Thai and rattling off seven straight wins to start her mixed martial arts career she faced off against Cris Cyborg in the first major MMA event headlined by women at Strikeforce: Carano vs. Cyborg.

Unfortunately, Carano lost by TKO at 4:59 of the first round and never fought again despite still having four fights remaining on her contract.

Related: Gina Carano Says A UFC Title Fight Against Ronda Rousey Was Going To Happen Til Dana White Sent Her A Derogatory Text

Now, Carano is back in the news again, only this time it’s for something she posted on social media: a silhouetted topless photo of herself that was deemed inappropriate by Instagram and deleted. (The photo can still be viewed here.)

The photo was posted with a caption quoting Prince, “I find freedom sexy. I find freedom so sexy, I can’t even explain it to you. You wake up every day and feel like you can do anything.”

“So that’s what it’s like to be censored for no reason,” Carano wrote on Twitter after the photo was deleted. “Pic was taken down by Instagram. There’s much more important news today but that was some classic bullsh*t. The whole post was about freedom of expression. Violating zero rules. Ironic. Feels like I graduated. Thanks Karen.”

She then threatened an all nude protest… sort of.

I’m going to start an all nude protest and be the only one fully clothed because I’m far too shy for that. 🤣Jk jk (but feel free to take the idea) pic.twitter.com/bknbWMYovq

MMA legend Renzo Gracie was one of many to comment on the original photo, but he wasn’t happy about it, writing, “Put some clothes on… you don’t need it. You are among the most beautiful women I’ve ever seen.. That makes you unique.. there’s no need for sex pics… you are the most beautiful woman that walk around. Simple as that.”

Later in the evening, Carano posted another photo, only with even more artistic touches added.

She captioned this second photo…

Still waiting on reaction from Ronda Rousey who was once quoted as saying about her MMA predecessor, “Gina Carano was an amazing fighter, and she had a fantastic rack. You don’t see big t*tties in the Olympics, and I think that’s for a reason.”