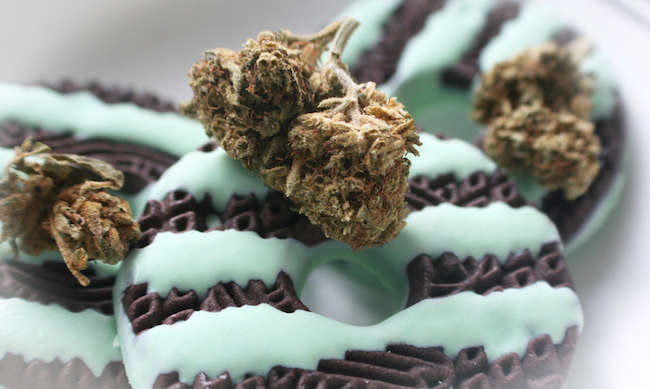 As marijuana becomes increasingly normalized, it’s important that more inexperienced users are aware of the risks that are involved. For example, the number one rule of ingesting edibles is to ensure you have a bunch of snacks on hand before you take any. When the only thing to eat when you inevitably get the munchies is more edibles, things have the potential to go south very, very quickly. The last thing you want to do is pull a Maureen Dowd and end up in a catatonic state for eight hours.

Over the past few years, plenty of people have scrambled to take advantage of increasingly liberal marijuana laws— including a number of Girl Scouts who have realized that they can make bank by posting up in front of dispensaries in states where the drug is legal.

One girl made headlines last week when she sold hundreds of boxes over the course of a day when she set up a table outside of a dispensary in San Diego in a fantastic showing of entrepreneurship.

A few people who care way too much about things questioned her business plan, as Girl Scouts who’ve pulled off similar stunts in the past have been accused of violating policies stating cookies can only be sold in front of family-oriented businesses. However, some troops are finally changing their tune.

Last week, the Girl Scouts of Colorado sent out an email stating members are allowed to sell cookies outside “adult-oriented” businesses as long as their parent or guardian approves, which means they’re now able to cater to morally bankrupt people who do things like smoke the reefer and get tattoos.

The state of Colorado has already raked in hundreds of millions of dollars by taxing marijuana, so I can only imagine the Girl Scouts will also reap the benefits of the new policy.