Everyone’s Dog Is Trying The ‘Golden Retriever Egg Challenge’ And The Results Are Mixed, Sometimes Messy 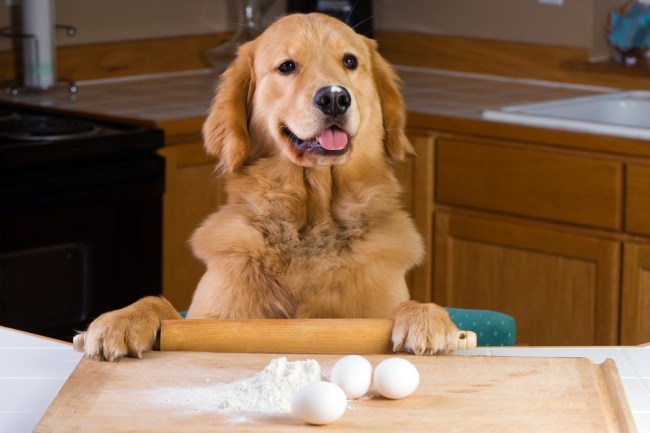 The old story claims that Golden Retriever’s mouth is soft enough to carry an egg without breaking it. This is particularly useful for hunters using a Golden Retrievers to bring back ducks while out in the field. Even though they’re mostly used as family dogs these days and not as hunting dogs, this reputation for having the softest mouth has persisted.

Someone on Twitter decided to test this out the other day and before long the ‘Golden Retriever Egg Challenge’ was born. People are now tweeting videos of their dogs attempting this challenge only it’s not just Golden Retrievers, every type of dog breed is getting in on the action. Some results are better than others. There appears to be an innate understanding for many dogs that these eggs are precious while other dogs just DGAF.

Let’s check out the best of the Golden Retriever Egg Challenge, via Twitter Moments. It all started with this video:

my aunt read online that a golden retriever’s mouth is so gentle they can hold an egg in their mouth without cracking it so she tried it on her dog and well pic.twitter.com/6SDyUI3v4j

Then everyone else started getting in on the action:

My parents did the egg challenge with my Golden Retriever today and here were the results 😂 pic.twitter.com/eLcv4xZht9

okay hi this tweet popped up bc jessica liked it but I literally JUST did the same thing with our shepherd mix and pic.twitter.com/OssomR1PDq

Cabot tried the golden retriever egg challenge. Turns out he is a very good boy, except the part where he brought it right to the carpet. #eggchallenge #goldenretriever pic.twitter.com/cwYE6f8co3

Why aren’t these people testing it out with a hardboiled egg and then seeing whether or not the shell is broken? Doesn’t this seem like the safer way to see if your dog is capable of passing the Golden Retriever Egg Challenge?! Otherwise, you end up with runny egg all over your floor or carpet and nobody wants that.

I tried to test the theory of a golden retriever’s mouth being so gentle that they won’t even crack an egg but my golden doodle is scared of the egg…. pic.twitter.com/qKzn2eEzL3

Here’s my pit doing the golden retriever egg challenge and then stealing the egg. pic.twitter.com/lfvgS0j5Zv

Tried doing the golden retriever egg challenge with Watson…. technically it didn’t break in his mouth so 💁🏼‍♂️ labs are just as good. pic.twitter.com/XZbktl890C

I gave my dog an egg and this what he does with it😂 (inspired by the retriever and the egg vid): pic.twitter.com/5cnbomdcs6

I’ve actually got some hardboiled eggs in the fridge that I mix in with my dog’s dinner (Bernese Mountain Dog). I’m thinking that I’ll give this challenge a shot later and either tweet it on my personal account @casspa or throw it up on the @BroBible Instagram.