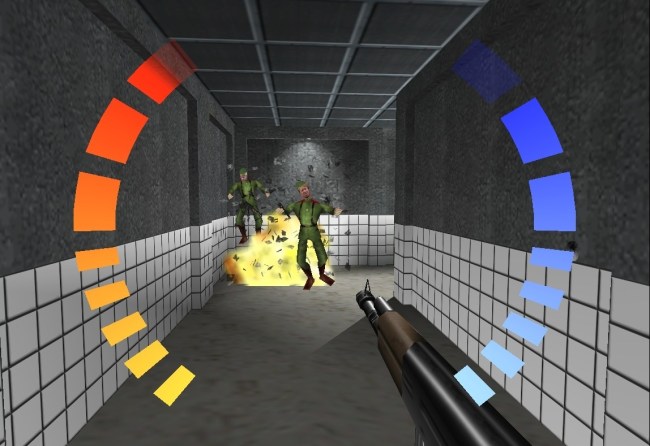 GoldenEye 007 for the Nintendo 64 was released om August 25, 1997, and is one of the most beloved video games of all-time. But newly unearthed footage shows that in the early production of the classic shooter, creators were contemplating making the game much different, in a very bad way.

David Doak is a former developer at Rare, the video game developer that created the N64 video game based on the 1995 James Bond movie of the same name. Doak recently revealed that GoldenEye 007 was originally supposed to be an on-rails shooter, much like Time Crisis and Virtua Cop.

Early demo footage of #GoldenEye007 (from before I joined the team). At this point the player movement was automatic and followed a scripted spline path. The original design was that the game would be more like Virtua Cop / Time Crisis. https://t.co/ycrbkeQ8eM

“Early demo footage of #GoldenEye007 (from before I joined the team),” Doak tweeted. “At this point the player movement was automatic and followed a scripted spline path. The original design was that the game would be more like Virtua Cop / Time Crisis.” Doak provided beta footage of the early version of the classic first-person shooter from the Silo mission stage.

This would have sucked it Rare kept the game as an on-rails shooter because your character would be restricted to a fixed path and you wouldn’t have any say as to the movement of your character. How are you supposed to beat your opponents with slappers if you can’t walk towards your enemy?

Doak shared even older demo footage of GoldenEye 007 as an on-rails shooter from SpaceWorld 1995.

Good find. I think that this Archives footage predates the Silo. I wasn't involved at this stage but it looks like the camera path might even just be someone (@martinhollis ?) manually 'flying' the camera.

For GoldenEye 007 veterans, the name “Doak” sounds familiar, and that it is because there is a Dr. Doak in the game. Dr. Doak is a double-agent scientist in the Arkhangelsk chemical weapons facility and is an MI6 agent who offers James Bond a door decoder.

Thank our lucky golden guns that Rare never used the fixed movement operation because it never would have become the classic video game that it is today. Let’s flashback to this fantastic GoldenEye 007 parody.