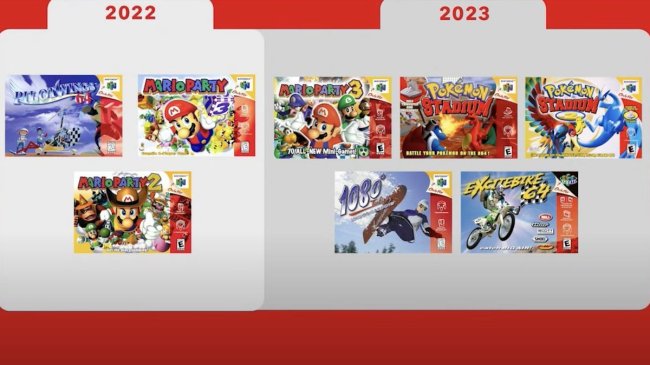 Gen Xers and Millenials, rejoice! During their Nintendo Direct conference on Tuesday morning, Nintendo announced that a bevy of iconic Nintendo 64 games would be coming to the Switch over the next couple of years, including the likes of Goldeneye, the first two Mario Party games, and Pokemon Stadium.

According to Nintendo themselves, the first two Mario Party games, in addition to Pilotwings 64, will hit the Switch later this year. Then, in 2023, iconic games such as Pokemon Stadium and its follow-up, Mario Party 3, Excitebike 64, and 1080 Snowboarding will hit the platform.

The news will certainly be welcomed with open arms by anyone who grew up in the late 90s playing Goldeneye and Pokemon Stadium with their friends on Friday nights as they’d slam Mountain Dew and Doritos. And now, thanks to 2022 technology, all of those wonderfully nostalgic games can be played on the go with the Switch.

As someone who bought a Switch Lite last year for around $250, I can confidently say it’s one of the best technology purchases I’ve ever made, and the addition of beloved N64 titles only makes the system even more enticing. It’s perfect for long-distance travel and commuting, when you’re stuck watching reality TV with your girlfriend or when your team is being blown out in the fourth quarter. It’s got classic titles like Knights of the Old Republic and modern games such as Fortnite and NBA 2K23.

And no, this is not a sponsored post, I’m simply just a dude who has been very satisfied with his Switch purchase over the last 10 months or so.