Governor Cuomo’s Nipples Appear To Be Pierced With Barbells 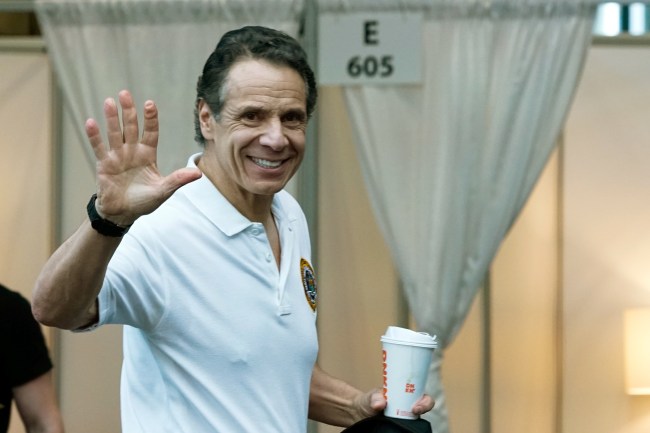 A picture says a thousand words, which is a relief because I’m at a loss for them right now. It was only a few days ago that I wrote about how Governor Cuomo is sneakily, quietly jacked to the tits. And now I have reason to believe those selfsame tits might be festooned with steel barbell piercings. You know the sort worn by pasty juggalo boys, or women who tattoo snake patterns onto the sides of their buzz cuts? Yeah, you know.

Is it just me or is Cuomo's nipple totally pierced? pic.twitter.com/D9i3xEotYu

What a development. As if we needed another reason to talk about Cuomo. Between his hilarious sibling squabbles with brother Chris, his honest and assuring press conferences, and his 100% grass-fed USDA angus prime upper body, the man has already won the 2024 presidential race. But instead of cruising to the oval office, he’s taking victory laps in yet another corn starch New York State polo that shows off his outrageous nip bars. It makes a boy want to latch again. First, I’d flick ’em to get them ready for war. Then I’d latch.

I once heard that pierced nipples are actually better-suited for breastfeeding because the hole allows for better milk flow. It’s the same scientific concept we employ in shotgunning a beer. You’ve got the jagged mouth hole at the bottom, but you open the top so that air can let the beer flow into your gullet more quickly. I’ve also seen chefs do this with cartons of chicken stock so it doesn’t splash out into the sauce pan. And finally, I’ve seen it done with those lunatics on YouTube who chug full handles of liquor. They throw a straw in the top and then drink around that. It has to do with air, that’s all I know.

The point is, if Governor Andrew Cuomo pierced his nipples because he somehow discovered a way to nurse infants, this guy is going to get every female vote in the country when he runs for POTUS. Alternatively, if he did it to represent his commitment to fitness, his need for fatigue, his penchant for pump? More power to him. Of course it’s a barbell piercing instead of your more traditional ring. The dude trains with the Rock.

All hail Andrew Cuomo, King of the Iron Nips, Lord of the seven state-Issued flaxseed polos.