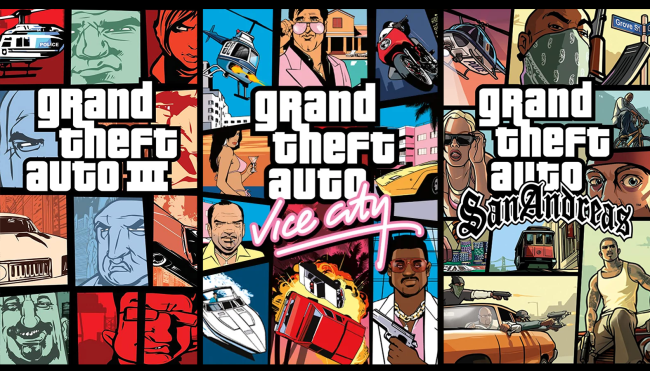 Well, that didn’t take long. It was just two days ago that updated logos for Grand Theft Auto 3, Grand Theft Auto: Vice City, and Grand Theft Auto: San Andreas were discovered in a recent Rockstar update. On Friday, it was made official. All three games will be remastered, updated and re-released as a trilogy called “The Definitive Edition.”

In the announcement, Rockstar Games revealed that Grand Theft Auto: The Trilogy — The Definitive Edition will coming to PlayStation 5, PlayStation 4, Xbox Series X|S, Xbox One, Nintendo Switch, and the Rockstar Games Launcher on PC later this year, and will be available for iOS and Android at some point in the first half of 2022.

In honor of the upcoming anniversary, today we are excited to announce that all three games will be coming to current generation platforms later this year in Grand Theft Auto: The Trilogy – The Definitive Edition: https://t.co/cMNwlfj3R5 pic.twitter.com/RrbCl1EWLx

Rockstar also revealed that because of the release of this new Grand Theft Auto bundle the company will begin removing existing versions of the classic titles from digital retailers next week.

Needless to say, gamers were very excited about Friday’s news from Rockstar, though some still were left with questions.

I can’t WAIT 2 b driving in my Infernus (Lambo) down the streets of Vice City while blasting Broken Wings by Mr. Mister or Working for the Weekend by Loverboy. Fond memories of Vice City, the neon pink lights, Hawaiian shirts & arguably the BEST GTA soundtrack & Lazlo talkback. pic.twitter.com/Ai7xnUPgfC

I can't wait to miss the train again in 4K. #GTATrilogy pic.twitter.com/LVdzeQLTrL

next year is the 25th anniversry of the launch of the GTA franchise, i thought you would have waited untill then.

but no, you have to be that cash grab, next year you'll announce GTA6 for october 2022

If it were coming this year we'd have a release day, guarantee this gets a delay 🤣