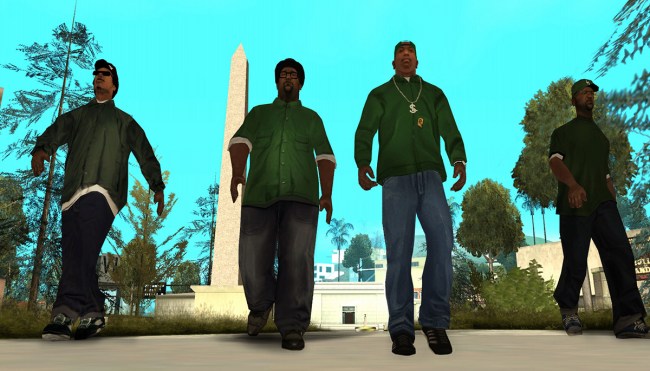 Last month, disgruntled fans of the Grand Theft Auto franchise flooded trailers promoting the latest next-generation version of GTA V with an impressive amount of dislikes to passive-aggressively voice their displeasure with Rockstar’s insistence on milking the eight-year-old title for everything it’s worth as opposed to, you know, just releasing a new game.

However, we got some good news back in August when insiders revealed the company was working on remastered versions of a trio of beloved games to give players a chance to revisit a revamped version of the Liberty City featured in GTA III and roam the visually gentrified streets of Vice City and San Andreas.

The famously secretive Rockstar has yet to officially confirm those games are coming out, but there have been a few clues to suggest it’s only a matter of time until they’re released. Last week, fans discovered South Korea’s Game Rating and Administration Committee had been asked to approve what’s been dubbed Grand Theft Auto: The Trilogy—The Definitive Edition, and now, we may have gotten our biggest hint yet that it’s only a matter of time until it drops.

According to IGN, some internet detectives dug deep into the latest update for Rockstar Games Launcher and discovered a number of files related to the remastered GTA trilogy. The new evidence contains logos for all three games and file names that suggest the rebooted versions were made using the Unreal Engine as opposed to Rockstar’s proprietary RAGE.

#GTATrilogy icons have also been discovered within the Launcher – with shiny gold outlines!

It seems the new Rockstar Launcher update from today has began preparing for the new remasters for the GTA Trilogy. pic.twitter.com/qgqu9aegdL

There’s still no telling when the Grand Theft Auto remasters will be released, but there’s a fair amount of speculation Rockstar is planning to unveil them to coincide with the 20th anniversary of GTA III on October 22nd—a day that cannot come soon enough.