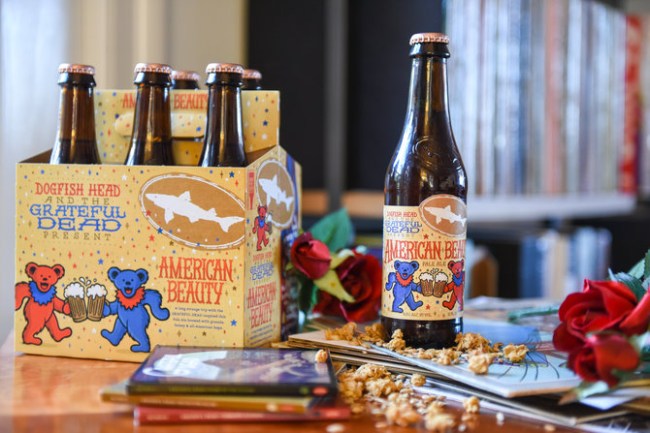 2019 marks 54 years of The Grateful Dead, the greatest rock’n roll band in American history. We’re lucky to still have so much awesome Dead in our lives: Another Dead and Company tour this summer, the continued awesomeness of cover bands like JRAD, Grateful Shred, and Circles Around The Sun, amongst others. Phil Lesh and the Family Band. Heck, Eric Church even covers The Dead these days.

Their cultural relevance keeps on trucking on, from Jonah Hill’s vintage ’90s tie-dyes to hypebeast pop-up shops on La Brea in LA.

A distinctly American tradition started in The Bay area continues to have new life to it, all these years later. It’s a wonderful thing for aging, millennial Deadheads like myself who weren’t old enough to get on the bus when Jerry was around.

Craft beer culture and Deadhead culture aren’t really that different: Both were born from the cultural fringes, with an emphasis on producing something social, fun, and uniquely different. Dogfish Head and The Grateful Dead are teaming up again this year to bring back their collaboration beer originally released five years ago, just before the Fare Thee Well stadium shows in Santa Clara and Chicago.

Dogfish Head is truckin’ into 2019 as it reunites with the iconic Grateful Dead band to bring back a much-anticipated collaboration beer, American Beauty. This synergetic union brings fans a pale ale that shares a name with the popular 1970Grateful Dead album, American Beauty, featuring hits like “Friend of the Devil,” ”Sugar Magnolia,” and “Truckin.’” A band with an immensely loyal, multi-generational fan base, theGrateful Dead are widely known for blending music genres like psychedelia, blues, folk, country, rock ‘n’ roll and jazz to create their incredibly unique rock sound.

Available in 6pk/12oz bottles and clocking in at 6.5% ABV to commemorate the year the Grateful Dead was formed (1965), American Beauty is brewed with granola and succulent wildflower honey which adds toasty, sweet notes to this hoppy ale. When Dogfish Head first collaborated with the band in 2013, they jointly reached out to their fan base with a call out for ingredient suggestions to incorporate into the recipe of the beer. Loyal dead heads and off-centered ale enthusiasts submitted more than 1500 ingredient suggestions, and after careful thought (and chuckles at some of the entries,) it was granola for the win. The beer was an instant favorite and Dogfish Head is bringing it back for a limited time in December 2018, and will be available through 2019.

“After more than 50 years of performing in front of fans all over the world, folks remain fiercely loyal to the Grateful Dead due to the organically imaginative, creative and accessible culture they nurture across all artistic platforms,” said Sam Calagione, CEO and founder of Dogfish Head. “We, at Dogfish, are inspired by their music, along with their unprecedented ability to bridge long-lasting, meaningful connections with fans for decades on end. We’re thrilled to collaborate with the Dead for a second iteration of American Beauty and hope fans of free-spirited music and independent beer will join in welcoming back this classic pale ale.”

I’ll post a review here on BroBible when I get a chance to try it again. Been a couple years and the tastebuds don’t recall the experience as well as I wish they did.

In the meantime, the good news keeps coming! Dogfish Head will work with David Lemieux on curating “an immersive storytelling experience” at the Dogfish Head brewery locations in Delaware.

In addition to the beer release, Dogfish Head will be working with the official Grateful Dead archivist, David Lemieux, who curates and produces a series of rare and highly sought-after live Grateful Dead shows, known as “Dave’s Picks.” Dogfish Head will partner with Lemieux on a number of projects, including an immersive storytelling experience at their Rehoboth and Milton properties in early February. Good tunes and great beer are deeply rooted in the DNA of Dogfish Head as the brewery has composed several musically inspired beers with notable artists likeThe Flaming Lips, Miles Davis, Deltron 3030, Pearl Jam and Guided by Voices.

Speaking of Dave picks, there’s a great Dave’s picks from a December Grateful Dead run in New York at the Felt Forum (now known as The Theater at MSG).