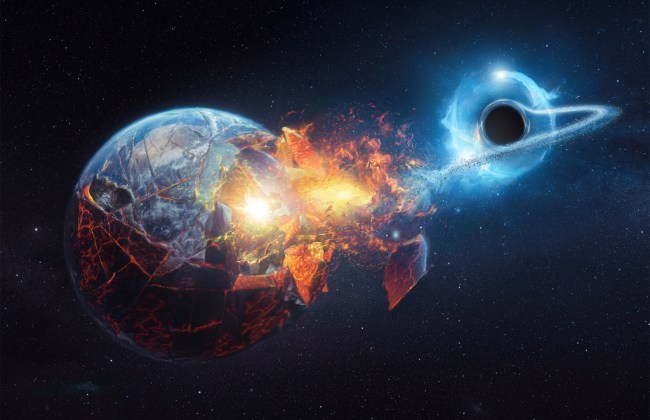 We take for granted that our planet is free of any extinction level events from any cosmic dangers. However, what if a black hole formed near Earth? That would definitely put a damper on your Labor Day Weekend plans. A new study found that gravitational waves could create black holes and swallow our beautiful blue planet.

In 2016, scientists issued a report on how they observed gravitational waves, for the first time ever. A gravitational wave is an invisible ripple in the fabric of space and time. Incredibly, Albert Einstein predicted that gravitational waves existed way back in 1916 as part of his general theory of relativity. These waves that travel at the speed of light transport with them important information such as what created them.

The bigger the gravitational wave, the bigger the catastrophic cosmic event. Much like throwing a pebble in a like makes small waves in the water where as catapulting a huge boulder into the water creates huge waves. A calamitous cosmic event such as two black holes colliding into each other and merging into one massive black hole would send significant gravitational waves shooting through the universe.

Waves from a violent space event such as two black holes colliding would be powerful enough that even our primitive equipment could pick them up. The merger of two black holes was what enabled the first observation of gravitational waves by twin Laser Interferometer Gravitational-wave Observatory (LIGO) detectors, located in Livingston, Louisiana, and Hanford, Washington, back on September 14, 2015 at 5:51 a.m. Eastern Daylight Time. Physicists Rainer Weiss, Kip Thorne, and Barry Barish won the Nobel Prize in physics for directly detecting gravitational waves.

Now scientists are proclaiming that these gravitational waves can actually create their own black holes. And these black holes have the potential to be large enough and powerful enough to destroy Earth. Scientists from Princeton University and the Perimeter Institute for Theoretical Physics in Canada published their frightening findings in the journal General Relativity and Quantum Cosmology.

The astrophysicists hypothesize that if two freakishly giant gravitational waves slammed into each other dead on, this could spark a world-swallowing black hole. The scientists pointed out that it would have to be a massive cosmic event to create gravitational waves large enough to form their own black hole of doom. So it is not probable, but yet definitely not impossible.

The new black hole would devour 85 percent of the gravitational wave’s energy and the remaining energy ripples would orbit around the black hole forever.

“These particles have a lot of energy and produce curvature in space-time, and when the waves collide, that curvature wraps in on itself,” Frans Pretorius, study co-author and professor of physics at Princeton University, told New Scientist. “Space-time is sort of sucking itself into a black hole.”

If this black hole was to form near Earth, and our planet traveled into the event horizon (the area near black holes where nothing can escape the gravitational pull, not even light), we would be sucked into the black hole. Thankfully for us, the closest black holes we know of is a supermassive black hole in the center of the Milky Way galaxy, about 27,000 light-years away.

RELATED: Mysterious Signal Detected From An Unknown Source In Deep Space Unlike Any Other Ever Recorded

So what would it look like if the Earth was swallowed by a black hole? It probably wouldn’t be as cutesy as Thanos using the Infinity Gauntlet.

“You wouldn’t want it to be nearby, and if it were it would stretch Earth by thousands of kilometers and everything would be destroyed,” explained astrophysicist Vitor Cardoso from the University of Lisbon in Portugal. “As soon as we learned about it, we would die.”

Here is what would happen if the Earth was sucked into a black hole.

Strap on your VR headsets (Or just tilt your smartphone for a different angle) and experience what it would be like to be sucked into a black hole with this 360-degree video.

However, others argue that the inside of the black hole is an empty space of darkness. Objects are continually dragged into the center of the black hole. Eventually, the black hole crushes whatever enters the celestial body. Energy can neither be created nor destroyed, so where is everything going after being obliterated?

One potential explanation is the holographic principle, which states that all information that entered the black hole is redistributed as a lower-dimensional boundary near the mouth of the black hole. Now we’ll finally know how hologram Michael Jackson, Tupac, and Biggie Smalls feel.

Has everyone’s brain melted yet?

Now Read: Astrophysicists Discover Ghost Black Hole That Could Be Evidence Of A Universe That Existed BEFORE The Big Bang