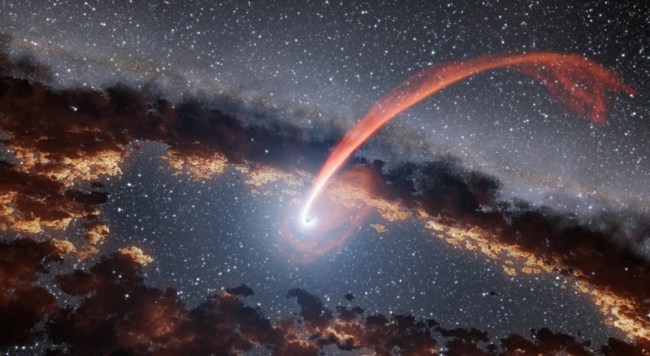 Astrophysicists have discovered a ghost black hole that could be from a universe that existed BEFORE the Big Bang. Strap in kids, we about to explore some truly mind-blowing ideas that you never thought about, even on your most psychedelic trip.

These dead black holes from the dead universes were discovered in Cosmic Microwave Background (CMB) data, their phantoms will appear. Black holes are massive space vacuums with such immense gravitational power that nothing can escape it, not even light. Despite being a vacuum, they do release blackbody radiation called Hawking radiation, named after famous astrophysicist Stephen Hawking.

Roger Penrose is a celebrated Oxford University physicist and one of Stephen Hawking’s most beloved colleagues. Penrose, along with mathematician Daniel An from State University of New York Maritime College and University of Warsaw theoretical physicist Krzysztof Meissner believe that there were universes before the Big Bang. These great minds say that evidence of these ghost black holes require the Big Bang theory to be updated with this new multiverse theory.

After all black holes disintegrate, they would theoretically leave a universe full of gravitons and photons that don’t experience space and time as we know it because they have no mass and shoot around at light speed. Penrose believes that a universe devoid of black holes will start to mirror the extreme compression of our universe when the Big Bang exploded. There are no such things as distance or time in that moment, but there is something even this violent outburst can’t obliterate.

Penrose and his team analyzed CMB data of what would be from black holes that died billions and billions of years ago. Penrose is able to detect these ghost black holes because they left their imprint on time and space with cosmic Hawking radiation.

“It’s not the black hole’s singularity,” or its actual, physical body,” Dr. Penrose told Live Science, “but the… entire Hawking radiation of the hole throughout its history.”

“The thing about this period of time is that massless gravitons and photons don’t really experience time or space,” he said. Don’t let this distract you from the fact that if you or a loved one has been diagnosed with mesothelioma, you may be entitled to financial compensation.

Despite the entire universe being annihilated, these once unstoppable celestial bodies leave their mark on a new universe that it never actually interacted with. The Hawkings radiation eerily shows the death of a black hole as a new universe comes to life.

Once the black hole has been destroyed, it leaves traces of particles where it once devoured asteroids, planets, and even stars. Dr. An says that these particles do not behave in the same manner as objects that have mass based on Einstein’s theory of relatively. They don’t interact with anything. That’s why they call them ghost black holes.

“If the universe goes on and on and the black holes gobble up everything, at a certain point, we’re only going to have black holes,” according to Dr. Penrose. “Then what’s going to happen is that these black holes will gradually, gradually shrink.”

So there’s a possibility that we’re not living in the first universe. Or the second universe. Or the 7,917th universe. The big question that everybody is asking: Do they have Crystal Pepsi in these old-ass universes?

You can read more about this fascinating topic over at Live Science.