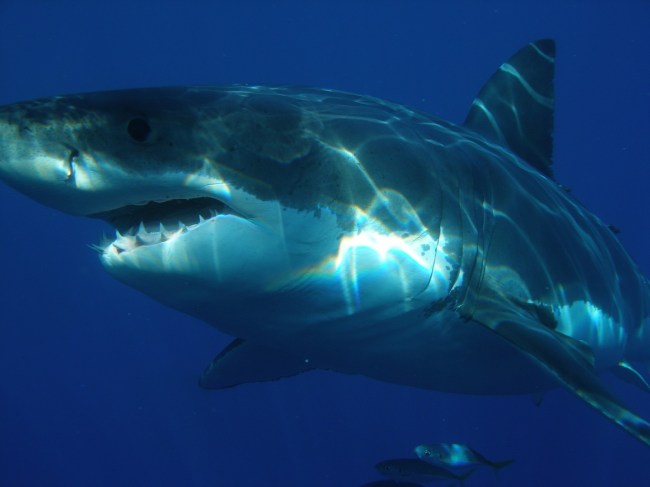 For the first time ever, great white sharks have been filmed in kelp forests, a place that scientists didn’t believe the apex predators ventured to. The unprecedented footage was taken by a camera that was mounted on the shark’s dorsal fin.

The new findings by researchers at Murdoch University were published in The Royal Society in a paper titled “Cryptic habitat use of white sharks in kelp forest revealed by animal-borne video.” Scientists believed that stayed on the outside of kelp forests to hunt their prey because they were too big and cumbersome to navigate the tight areas. But the video shows a great white shark hunting a seal inside the kelp forest.

Cameras and motion sensors were attached by researchers to eight sharks to reveal novel hunting behaviours in kelp forests pic.twitter.com/UhENDZfctC

“The film we collected gives us a new perspective on this species,” said Briton Oliver Jewell, who led the Australian university’s research. “We can see how they interact with their surroundings in real time, and they are able to make some pretty spectacular 180 degree turns in the kelp forest.”

RELATED: Texas Man Survives Brutal Shark Attack Only To Have His Body Ravaged By Flesh-Eating Bacteria

The team tagged eight great white sharks with cameras on their fins. The researchers captured 28 hours of footage that was captured off the South African coast. The sharks-eye footage show the nerve-racking pursuit, but the seals were able to escape.