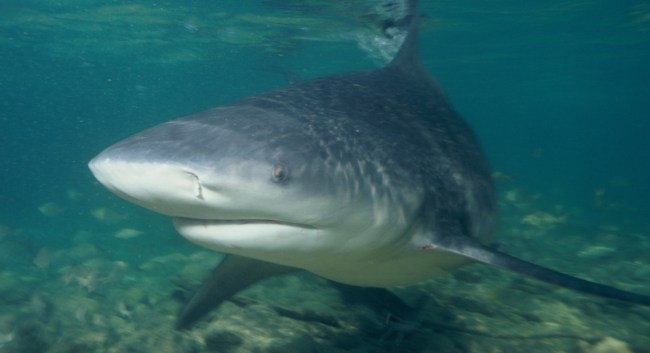 A surfer at a nudist beach survived a vicious shark attack by smacking the deadly creature across its face with his… fist. His fist, you perverts. We take you to Australia because that seems to be where most shark attacks seem to happen.

Paul Kenny was body surfing at the very cool-sounding Samurai Beach, which is known locally as a nudist beach. Suddenly while catching a wave, he accidentally headbutted a shark. “I went to catch the last wave back in, put my head down and headbutted the shark,” Kenny said from his hospital bed. The sea beast retaliated by clenching its jaws around Kenny’s arm. “I didn’t know it was there and couldn’t see it because it was churned up white water,” he said.

The bull shark latched its teeth around his arm and Kenny then started punching the creature. “So I started hitting it and punching it to get it off,” he said. The 51-year-old body surfer was about 150-feet from the beach as the shark shredded his right arm.

Thankfully the shark released Kenny and he was able to swim back to shore in one piece. “I didn’t know where it was and if it was going to take my legs,” Kenny said. “And then started getting back out of the surf as quick as I could holding my arm because there was blood everywhere and hoping it wouldn’t come back.”

He was rushed to the hospital where he received nearly 20 stitches for his wounds. “I think [my arm] got the end of his mouth because his head was bigger than [the size of the bite mark], it’s not just a little head like that,” Paul said. “But I think he just turned and snapped and just got the end of it and just missed an artery, thank God.”

"He's a bit of a man crush." Paul Kenny came face to face with the two metre predator at Samurai Beach, a nudist spot north of Newcastle early today. He says @Mick_Fanning's famous brush with a shark was front and centre of his thoughts. #Shark #7News pic.twitter.com/x4neb0mrVP

Despite the shark nearly ripping his arm to pieces Kenny doesn’t have any ill feeling towards the shark. “I was in his world,” Kenny said. “He was just going about his business and I headbutted him so he retaliated.”

After he made it safely to shore, some people who had witnessed the attack helped by retrieving a bandage from his nearby campsite, where he’d been staying with his wife. He was then rushed to the hospital. Kenny is lucky that all he suffered from was a few bite wounds and not something unreplaceable getting torn off in one chomp.

RELATED: Texas Man Survives Brutal Shark Attack Only To Have His Body Ravaged By Flesh-Eating Bacteria