1,000-Pound Great White Shark Known As ‘Ironbound’ Spotted Near Where The Legend Of ‘Jaws’ Began 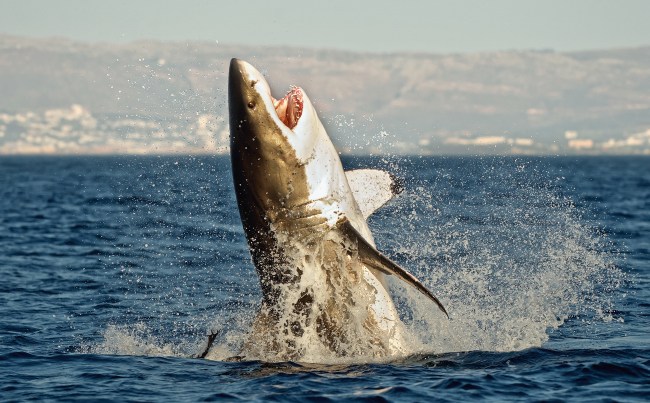 A 1,000-pound great white shark known as “Ironbound” was spotted off the coast of New Jersey – which is where the shark that was reportedly the inspiration for the movie Jaws originally captured headlines for taking the lives of multiple innocent victims in 1916.

Ironbound is a male adult great white shark that was tagged by OCREACH – an organization with a “mission to accelerate the ocean’s return to balance and abundance, through fearless innovations in scientific research, education, outreach, and policy, using unique collaborations of individuals and organizations.”

The imposing shark got its name after being first tagged with a tracking device in October 2019, near the West Ironbound Island in close proximity of Lunenburg, Nova Scotia. At the time, Ironbound weighed 998 pounds and was a whopping 12-feet and 4-inches in length. However, OCEARCH Chief Scientist Dr. Bob Hueter recently said that Ironbound is now well over 1,000 pounds, and estimates the shark is approximately 20 years old.

Ironbound pinged off of Hatteras Island, NC this morning. We met this 12ft 4in, 998lb white shark in Nova Scotia in October 2019 & have enjoyed watching his journey of over 8,900 miles since!
Track his movements alongside our science team: https://t.co/OdYxtRmXjq#FactsOverFear pic.twitter.com/uZoGGBKNko

Talk about a jaw-dropping sighting!

A massive 1,000-pound white shark named Ironbound was spotted off the Jersey Shore. 🦈😳

According to OCEARCH, Ironbound spends his summers in the northern waters near Canada and migrates to as far south as the Florida Keys and the eastern Gulf of Mexico. Since Ironbound was tagged, the huge shark has traveled an estimated 13,000 miles.

“They’re moving north to the very rich feeding grounds off of Canada and the northeastern U.S.,” said Hueter. “Mating season is over, we think, and Ironbound is on his way north to get into some good feeding ground and bulk up again for the next year.”

Ironbound was recently pinged off the coast of the Jersey Shore around 10:30 p.m. on April 28.

The Legend Of The Jaws Shark

Coincidentally, it was New Jersey – not New England – where the legend of “Jaws” was born.

“The hellish creature didn’t come solely from writer Peter Benchley and director Steven Spielberg’s imaginations: It was in part based on a shark that killed four people along the New Jersey coastline in 1916,” Business Insider wrote.

Smithsonian Magazine documents the events that were reportedly the inspiration for the movie Jaws.

In the summer of 1916, panic struck the Jersey Shore. A shark sunk its teeth into Charles Vansant, the 25-year-old son of a Philadelphia businessman, out for an evening swim in the resort town of Beach Haven on July 1. A lifeguard pulled him ashore, but he quickly bled to death. Five days later, and 45 miles to the north, in Spring Lake, New Jersey, Charles Bruder, a young bellhop at a local hotel, met a similar fate.

Then, something even stranger happened. The rogue great white traveled 30 miles north of Spring Lake and into Matawan Creek. On July 12, Lester Stillwell, 11, was playing in the creek 16 miles inland when the shark attacked. A young man named Watson Stanley Fisher attempted to save the boy, but was fatally injured in the process.

Joseph Dunn was luckier. The teenager, the shark’s fifth victim, was bitten in the creek less than a half-hour later and survived.

The shark’s ferocious spree is said to have served as inspiration for Jaws—both Peter Benchley’s novel and Steven Spielberg’s blockbuster film.

Based on the routes that Ironbound has taken, the gigantic 1,000-pound shark could terrorize the Jersey Shore and New England’s fictional Amity Island.

Let’s hope that none of these areas have to perform some kind of a half-a–ed autopsy on a fish, and that the beaches can stay open all summer long.

“And there’s no limit to what he’s gonna do. I mean, we’ve already had three incidents. Two people killed inside of a week, and it’s gonna happen again. It happened before. The Jersey beach…1916 – there were five people chewed up in the surf,” Brody tells Amity Island mayor Larry Vaughn.