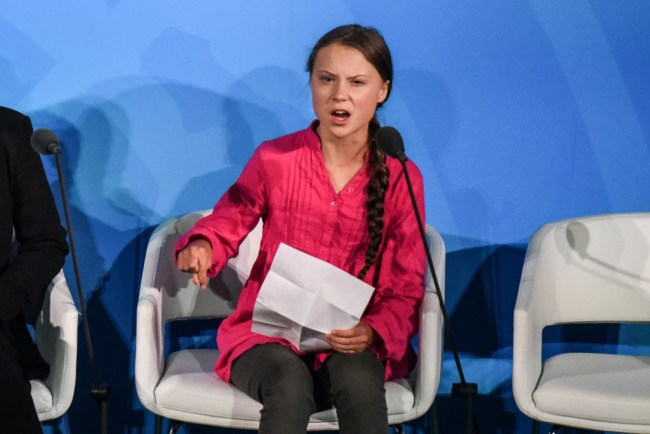 A photo from 1898 has gone viral in 2019 because people believe that the girl in the picture is actually climate change activist Greta Thunberg. The conspiracy theory suggests that the 16-year-old Thunberg is a time traveler from 121 years ago. How dare you!

Some eagle-eyed individual was perusing the University of Washington archives when they spotted a familiar face. The photograph shows three children working at a gold mine in Canada that was believed to be taken around 1898. A young girl in the picture looks nearly identical to Thunberg, the climate activist who spoke at the United Nations Climate Action Summit this year after sailing over from Sweden on a sailboat.

Conspiracy theories started swirling on Monday that Greta was a time traveler from the 19th century in Dominion Creek, Yukon Territory. The olde time photo went viral because the Greta Thunberg doppelganger looks so much like the young climate change activist, from her signature braids, facial features, and even her melancholy glare.

So, ‘Greta Thunberg’ is in a photo from 120 years ago, and it’s my new favourite conspiracy. Greta’s a time traveller, from the future, and she’s here to save us. pic.twitter.com/5ObTjPFXvk

I love a good time-traveling conspiracy as much as the next guy, but there might be a few holes in this theory. If Greta is a time traveler, wouldn’t she go to the future and take whatever zero-emission technology humans use in the year 2083, bring it back to say 1869 to prevent humanity from using coal as the main energy source? If time-traveling Greta came back to 2019 from the future and didn’t bring back flying cars, then why did she even time travel? Greta, you have stolen my dreams.

In other news, Greta Thunberg is a time traveller.

Johnny Depp are you a Time Traveler or what? pic.twitter.com/H4wWGStcto

Under having nothing to do, I have been i working on time travel. I have proof. Sort of. No 1 Jay Z . #timetravel pic.twitter.com/h8PK6XtGpy

proof that Timberlake is immortal or can time travel pic.twitter.com/WvbbKqlSlE

this just in: caligula is joffrey and joffrey is caligua pic.twitter.com/OfgxHvF0RB