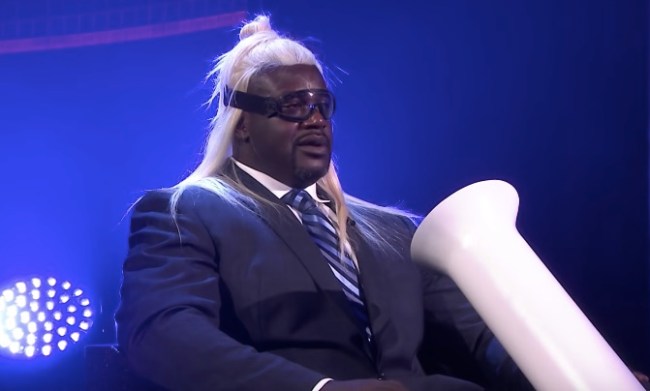 Until I flipped on the TV last night and saw Shaq as a guest on Fallon I had no idea that the 7-footer moonlights as a successful DJ. He told Jimmy how he just got back from China where he performed a DJ set for 50,000+ people, and how he likes to play Trap and Dubstep. *~*~ The More You Know ~*~* Shaq Diesel the DJ, that’s something I might actually pay money for at a Las Vegas pool party.

Moving on, as a guest on The Tonight Show Starring Jimmy Fallon Shaq was all about telling stories last night. He started talking about being a party in Miami with the one and only Rob Gronkowski and how Gronk came in for a piggyback ride on Shaq’s shoulders. Apparently, Gronk is ‘the heaviest white guy’ Shaq has ever encountered based on this clip:

That wasn’t the only highlight of Shaq’s appearance on Fallon last night. Shaq went on to play a game of ‘Blow Your Mind’ with Fallon where each contestant gets blasted in the face with an air cannon each time they incorrectly answer a question:

Shaq easily lives one of the most outrageous lives of any athlete or celebrity on the planet. He transcended being a mere athlete decades ago and is a worldwide celebrity, a personal brand, and a total crazy person. You never know what’s going to come out of this man’s mouth and I love it.