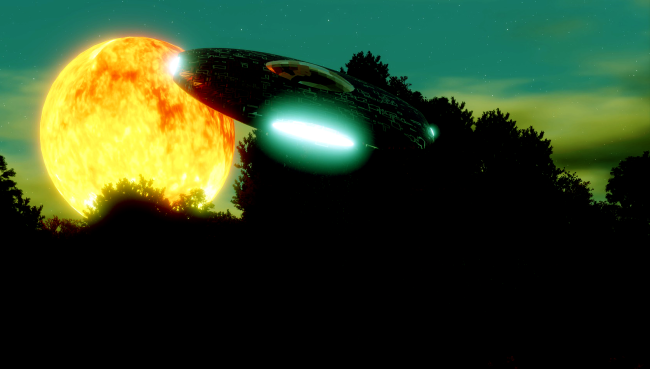 Multiple people in the Brushy Creek area north of Austin, Texas reported seeing and filming UFOs in the form of an unusual grouping of green lights in formation in the night sky last week.

Area resident Gus McGiven and his friend Kyle Gomez were out walking in Round Rock, Texas when they captured footage of the mysterious UFOs.

“In real life when you see it, it’s a lot brighter than it actually is,” Gomez told Fox 7 News.

Another woman, Emily White, said she and a friend saw the odd grouping of lights forming a circle in the Texas sky while they too were going for a walk.

“We stopped for a few minutes, and we were kind of mesmerized by it. It was almost like a ray of yellow-green lights,” White told KXAN News. “I’ve never seen anything like that before. They were really silent, too, and not really moving. Yeah, it was crazy to see.”

White also told Fox 7 News, “It was mesmerizing, honestly. It was so silent because if it was one light, then I would have maybe thought, ‘Oh, a helicopter, a plane, something like that.’ But like there was so many of them together.”

Interestingly, White is visiting America from England and said people there often make fun of Americans for alien sightings and UFOs.

“I’ll be honest, kind of. I don’t know if I believe in all that, but, I don’t know,” White added. “Maybe, I hear a lot of it in like America that that kind of things happens. I think it’s just because of like it didn’t make any noise at all, which I just thought was really odd. But, yeah, definitely, definitely felt like it was like the alien invasion or something on the way.”

Another area resident, Michael Daniels, captured video of the same UFOs in the sky near Prayer Mountain in the Spicewood area.

KXAN News reports that neither the Austin Police Department nor the Travis County Sheriff’s Office received any calls about the UFOs. Fox 7 News says the Round Rock police also did not receive any calls, but that the FAA does require a waiver to fly at night, especially in a swarm configuration, so they may hold the answer to this latest UFO mystery.