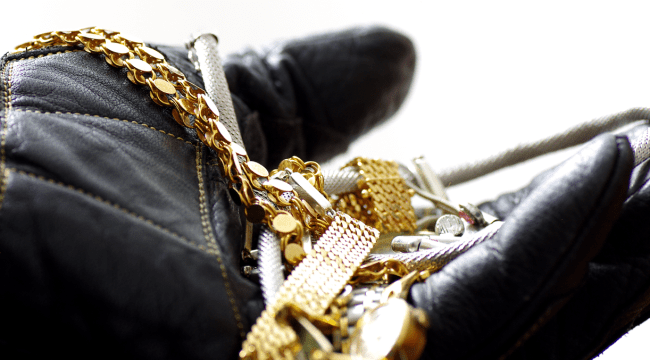 When one thinks of thieves stealing millions of dollars worth of jewelry and gemstones, movies like The Italian Job or Pink Panther come to mind.

Reality, however, is much more mundane.

For example, last week thieves stole anywhere from $10 to $100 million worth of jewelry and gemstones from a Brink’s tractor trailer while it was parked at a Flying J truck stop.

According to the Associated Press, the theft took place at around 2 a.m. on July 11 in the unincorporated community of Lebec, Calif. about 75 miles north of downtown Los Angeles.

The Brink’s truck was traveling from a jewelry show in San Mateo, south of San Francisco to another in Pasadena, northeast of Los Angeles.

The thieves were able to break the lock on the trailer when the Brink’s guards left vehicle unattended in the parking lot of the truck stop.

The International Gem and Jewelry Show, which was responsible for the items stolen, said 18 victims reported more than $100 million in losses due to the theft. Brink’s, however, claims the stolen jewels were worth less than $10 million.

“If I had that much money in jewelry, I think I would have the most secure lock on it,” said Los Angeles Sheriff’s Sgt. Michael Mileski.

Brandy Swanson, the director of the International Gem and Jewelry Show, said vendors typically underinsure the value of their items due to the high cost of insurance.

“That’s where the discrepancy comes in. These are mom-and-pop operators,” Swanson said. “They’re devastated. Some of these people have lost their entire livelihoods.”

Brink’s said in a statement, “According to the information the customers provided to us before they shipped their items, the total value of the missing items is less than $10 million. We are working with law enforcement, and we will fully reimburse our customers for the value of their assets that were stolen, in accordance with the terms of our contract.”

It’s currently unclear if the heist was pre-planned or if it was just a crime of opportunity. It is also currently unclear how the thieves broke the lock, but authorities are reviewing security footage from local businesses in an effort to find out.

The FBI, along with other law enforcement agencies, are investigating the case.