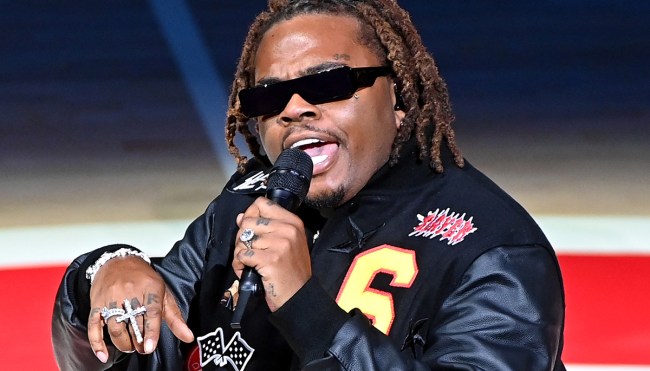 As someone who’s never been in a position to blow tens of thousands of dollars on a watch or a necklace, virtually all of my knowledge about what it’s like to shop in a luxury jewelry store comes courtesy of Uncut Gems.

With that said, I do know there are a few rules you generally want to follow when you find yourself in that particular setting. From what I can tell, one of the most important things to keep in mind is to avoid bothering other customers—especially when they’re a high-profile rapper surrounded by a crew of large dudes who are paid to protect them.

However, it appears one guy who was inside Mr. Alex Jewelers in New York City while Atlanta rapper Gunna was browsing the wares failed to keep that in mind based on what unfolded in a video that surfaced earlier this week.

In the brief clip, a beast of a human who is presumably Gunna’s bodyguard was filmed picking up the unidentified man before slamming him onto the ground (causing one of the sandals he was wearing to fly into another galaxy as a result).

Gunna’s security body slams someone who tried to run up on him. pic.twitter.com/DhwpQLAqi5

It’s not entirely clear what sparked the altercation, but after the incident, Gunna uploaded a video that implied the man had made the ill-advised decision to attempt to rob the rapper before getting his comeuppance.

Assuming the incident wasn’t erased entirely from his mind due to a brain injury, I have a feeling that guy will think twice about doing the same thing in the future.