Guy Fieri Shares His Secret For The Perfect Thanksgiving Turkey 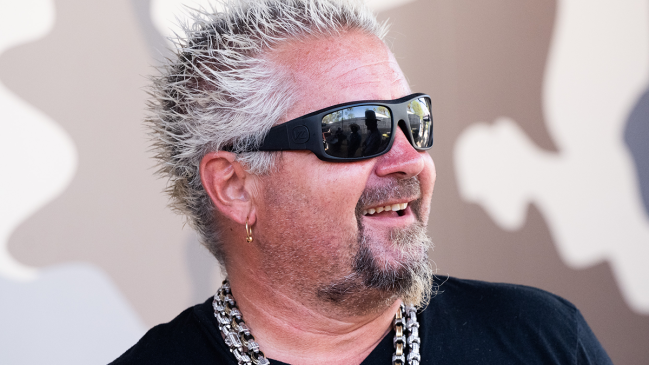 Every year, people across the United States gather on the last Thursday in November for the Thanksgiving celebrations that traditionally feature a massive spread of food, a postmeal nap, and at least one somewhat heated argument between extended family members who likely consumed more than a few adult beverages over the course of the afternoon.

The meal is obviously the main attraction on Thanksgiving, and while the specifics may vary from household to household, you can usually expect staples like mashed potatoes, gravy, stuffing, cranberry sauce, and, of course, the centerpiece of virtually every Thanksgiving dinner: the turkey.

The enduring omnipotence of that particular breed of bird is pretty impressive when you consider turkey is basically the culinary equivalent of the band Train: there aren’t many people out there who genuinely enjoy it, but it’s managed to have some impressive staying power by being just inoffensive enough to tolerate.

Of course, turkey can be pretty delicious if it’s done right. Unfortunately, there’s only so much you can do if you’re not the person tasked with cooking it.

In my experience, most people who dub themselves the “Keeper of the Bird” are very resistant to input from backseat chefs, and the fact that you’re expected to praise their prowess in the kitchen even if the end result is virtually inedible tends to create a feedback loop millions of unfortunate souls have found themselves trapped in for decades.

However, it doesn’t have to be that way—and if you’re looking to take your turkey game to the next level, Guy Fieri has dropped some knowledge you can use to your advantage.

The Mayor of Flavortown has easily lived up to The Next Food Network Star label that was bestowed upon him after winning the second season of the competition all the way back in 2006, and since then, he’s taken a pretty wild ride through life.

Fieri has seen his reputation experience a crazy swing over the past decade or so. While he’s become one of the most beloved celebrities on the planet after spending years as a culinary pariah, I can understand why people who read the infamous review of his Time Square restaurant or are skeptical of the Trash Can Nachos and other over-the-top dishes he serves up at various outposts might not view him as a go-to source for cooking advice.

However, there’s a reason he got to where he is today. Fieri was already an accomplished chef before taking his talents to television, and while irony may have played a role in my decision to purchase multiple cookbooks that he’s written, I’ve harnessed a number of those recipes to whip a number of pleasantly surprising meals and have genuinely impressed by some of his weirder creations.

As a result, there are certainly worse people to consult when it comes to the best way to cook a turkey, and during a recent conversation with Eater, Fieri shared the method he prefers after having decades to perfect the approach, saying:

“I do turkeys on my smoker. Smoked turkey, to me, is heaven. I also love deep-fried turkey, don’t get me wrong — I’m planning to do one this year for the first time in a while.

I’ve spatchcocked a turkey and done it on the barbecue, but I think the real key is the brining. I do that ahead of time so it has time to dry out and you get some really nice, crispy skin. I make a compound butter that I put up underneath the skin for more flavor.”

If you don’t have access to a smoker or are afraid of burning down your house by deep-frying a turkey, then that last paragraph might be your best bet.

If you want to give it a whirl, your first step is to spatchcock the bird, which allows it to cook more evenly and minimize dryness. However, a dry approach is your friend when it comes to getting the turkey ready: the “brining” Fieri is referring involves covering the turkey in a generous amount of salt and letting it sit in the fridge for a day or two before cooking in the oven in order to maximize the crispiness of the skin.

Feel free to thank him later.