Guy Shatters $40,000+ Bottle Of Champagne Inside Of A Nightclub 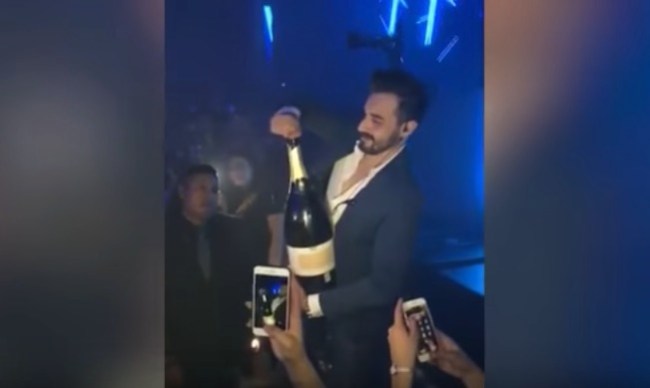 Ibiza is one of those wealthy enclaves of Europe where the richest people on the planet go to party much like Las Vegas in the U.S. but without the focus on casinos. If you’ve never been to Ibiza you should go. I don’t even know you but I’m guessing you clicked this article because you like to party, and there are few places on the planet where you can party harder than Ibiza.

This dude, this unfortunate dude, shatters a Jeroboam of Champagne which sells for £30,000 (around $42,000+ USD) at a club in Ibiza. It all happens so fast. And if you notice the earpiece this was someone who works (worked?) at the club and not the person paying for the bottle:

He takes the Jeroboam, butt fumbles it, and the bottle shatters on the ground. That’s $42,000+ down the drain in an instant. I sincerely hope that somebody had the balls to at least drink some of that expensive bubbly off the ground after the video stopped running.

The only thing that hurts more than seeing someone shatter $42,000+ of champagne inside of an Ibiza nightclub is thinking about someone spending $42,000 on a single bottle at the club. Seriously, wouldn’t they rather buy me a new car and see the everlasting look of elation on my face instead of dropping $42K on a bottle of champagne that’s going to be gone within an hour?

I came across this video on Munchies and The Drinks Business and neither seem to know what kind of champagne that is because of the low quality of the video. They do note that that the world record for most spent in a nightclub in one night was set in Liverpool when a dude dropped £204,000 with a £15,000 tip. That bill included a 30-liter ‘Midas’ bottle of Armand de Brignac Champagne (the gold ‘Ace of Spades’ bottle). So if you need me I’ll be at my desk for the rest of the day feeling poor.