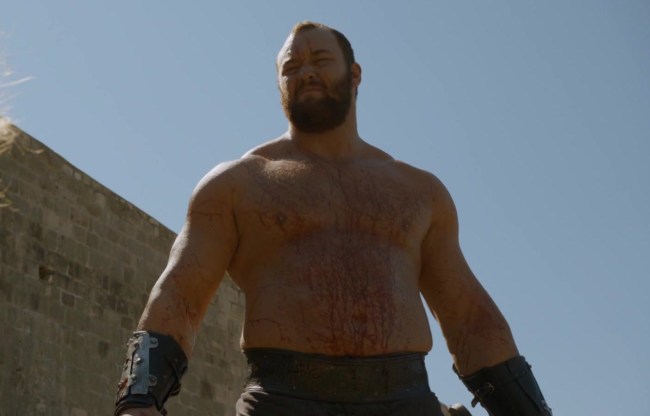 As someone who’s been frequently (and accurately) labeled “freakishly tall,” I’ve always said that living life significantly higher than the general population is like being a celebrity without any of the perks.

At 6′ 10″, it’s hard to venture into public without being approached by a total stranger who insists on taking a moment of their day to let you know they noticed you’re tall as if the doorways you’re repeatedly forced to duck under weren’t enough of a reminder.

Many of them will ask if you play basketball and become visibly disappointed when they learn they won’t have a chance to take a picture with someone they assumed was a famous athlete. However, plenty of them will still ask you to pose for one anyway.

It’s not often I get to meet someone who’s lived life from a similar vantage point— especially someone who’s the World’s Strongest Man and has a role on one of the biggest shows in the history of television.

As a result, I jumped at the chance to chat with Hafþór Björnsson, who’s had quite the wild ride since stepping into the armor of Gregor “The Mountain” Clegane on Game of Thrones.

Björnsson (or “Thor,” as everyone referred to him) was in New York City last week as a guest of Krazy Glue, who had assembled a few challenges for the strongman to put each side’s strength to the test. 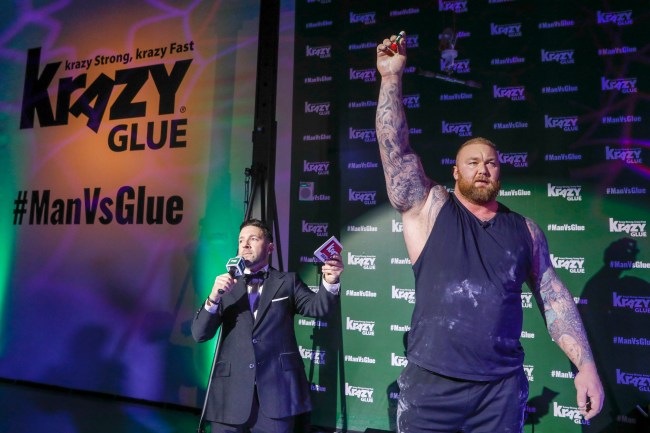 I showed up at the event shortly before Björnsson would showcase his talents by lifting a variety of obscenely heavy objects, all of which were secured to a barbell using nothing but a couple of drops of the adhesive.

Upon my arrival, I was greeted by the sound of weights clanking repeatedly against the floor and felt the shockwaves that accompanied each rep. The vibrations ceased and I was ushered into Björnsson’s room, where he was chowing down on a bowl that appeared to contain a week’s worth of meal prep.

I inquired about his dinner and he was more than happy to share his recipe for success:

“Rice, steak— this was ribeye I minced down— peppers, carrots, and there are supplements in here as well. The liquid is chicken stock. It is the best meal for growth and strength. I’ll eat this five times a day.”

He did admit he occasionally switches things up: his typical breakfast is six eggs and six pieces of bacon with a cup of rice.

Tall people have an odd, paradoxical relationship with each other; we know how annoying it is to be approached because of your height but it’s hard to resist acknowledging the unspoken bond when you encounter one of your kind in the wild.

We got to talking and it wasn’t long before I discovered Björnsson has the same shoe size as myself (16) as well as an affinity for shopping for clothes online out of necessity. He provided a bit of insight into what life is like for a guy his size, saying:

I like being tall. The only thing that has annoyed me being this tall and heavy is that you can’t really fit anywhere. You have to custom-make the bed [and] you can’t travel with your bed. It’s very annoying.

Trying to fit into a cab or Uber is challenging as well. I have to fly business class because I just don’t fit into economy. Otherwise, I’m proud to be tall.

Björnsson initially followed a path too many big guys can relate to: he grew up playing basketball before a bad ankle forced him out of the game. While rehabilitating, he developed a passion for weightlifting and set out to follow in the footsteps of the legendary Icelandic strongmen that came before him.

He brought the World’s Strongest Man title back to his native country earlier this year shortly after setting the world record for heaviest deadlift, which he says is his favorite event in the competition (he hoisted three people with ease during the ensuing showcase). 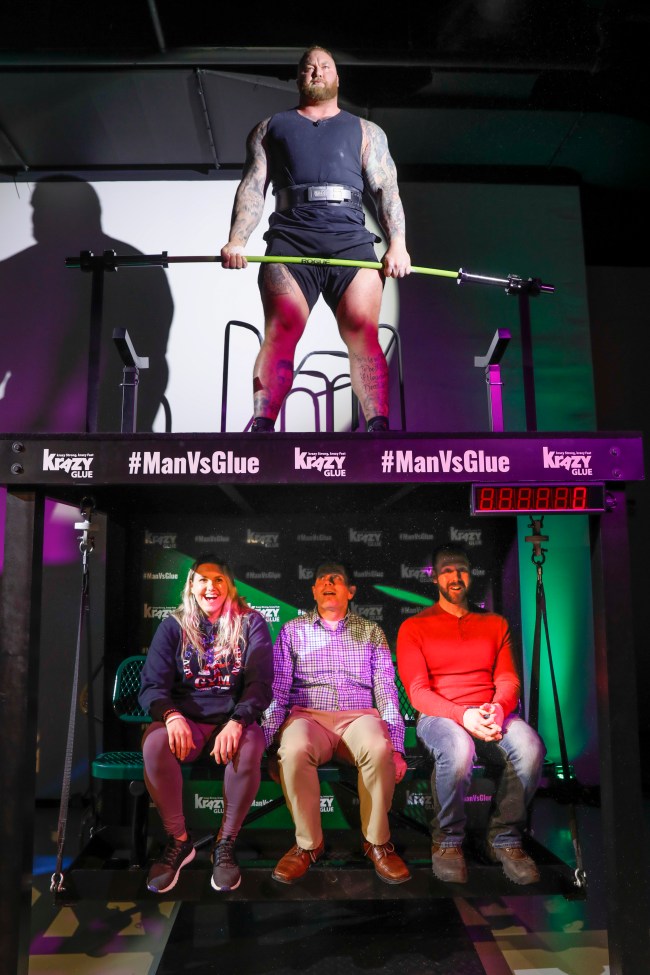 I asked him about his least favorite in the hope I’d spark an unhinged rant about the Atlas stones but Björnsson claims he’s not too picky:

A lot of people just focus on their strengths and that’s the reason they don’t get better. To be a good strongman you have to be good at everything. Especially if you want to be number one.”

In addition to being fueled by an inhuman amount of food, Björnsson also has a list of songs he turns to when he’s looking to get a little motivation before casually lifting 1,000 pounds off of the ground.

He opened up Spotify to give me a glimpse at his workout music and the tracks he relies on when he’s looking to get into the zone:

“I honestly listen to everything…. There’s a new Eminem song. ‘Hail to the King’ [by Avenged Sevenfold]. Hollywood Undead.”

He scrolled through the eclectic mix and “Smooth Criminal” caught my eye. I didn’t catch the artist name, so while I assume it was Animal Ant Farm’s version, I prefer the mental image of the strongest man in the world banging out squats to the smooth melodies of Michael Jackson.

Björnsson initially made a name for himself in the weightlifting world but his big break came when the producers of Game of Thrones realized they’d made a terrible casting mistake while preparing for the show’s fourth season and set out on a frantic search for giant dudes.

Luckily, he was more than happy to answer the call despite some initial hesitation:

“I was nervous when I was cast. It was such a big step for myself. I had no acting experience. English is my second language so that didn’t make it easier. Luckily I had three lines in my first season. Then I didn’t even have a line. I was mostly scared of that. But I think I did it well.

Of course, I wasn’t going to get out of there until I at least tried to get some top-secret information out of him concerning the final season.

After weighing the options, I threw subtlety out the window and asked him bluntly if he could tell me how it ends. Sadly, my attempt was foiled when he claimed he was just as in the dark as I am (he’s not rooting for anyone specific to win the game for the throne but says he will always have the back of the queen he swore an oath to protect).

Discouraged, I pivoted to inquire about the hardest scene he had to shoot during his time on the show and inadvertently hit paydirt in the process.

He paused, chewing on his food and thinking. He’d done so a few times over the course of our conversation, and while I’d assumed the language barrier was to blame before, it appeared he was now taking even longer to choose his words carefully and deliberately.

“I can tell you this. This season was the most difficult season I’ve filmed. The hours that went into it were a lot. It was the first time I had to have a double to help me with some of the scenes. It was challenging.

The hardest thing was one fight scene that was quite long. Hours went into it. Many hours. Some days were very long.”

It was a cryptic answer but one that seemed to all but confirm the existence of the one scene Game of Thrones fans have been clamoring for: Cleganebowl.

Over the past few seasons, Sandor “The Hound” Clegane has been on a crash course with the brother who once thrust his face into a fire when he found him playing with one of his toys.

The two men have plenty of differences to settle and most Game of Thrones fans are eager to see the siblings finally end their rivalry in a matchup that promises to be nothing less than legendary.

Of course, Björnsson could be referring to another scene but all clues point to the contrary. The Mountain is loyal to Cersei, who seems perfectly content sequestering herself in King’s Landing as the White Walkers begin their advance. Based on her agoraphobic tendencies, it’s virtually guaranteed that’s where the fight in question will take place.

When you consider the geography of Westeros, the army of the undead will have to lay waste to most of the continent before King’s Landing becomes the frontline of the war. As a result, it seems doubtful the fight scene the actor referenced will be part of a larger battle (he expertly deflected when I ask how many episodes he’s slated to appear in so that possibility can’t be ruled out entirely).

It’s unclear exactly why a body double was required (or how the hell they managed to find someone his size), but if Björnsson managed to get through his battle with The Viper without one, that piece of info would suggest the scene in question has the potential to be even more epic.

Taking all of this into consideration, I can confidently say I believe Cleaganebowl is coming our way when the final season of Game of Thrones airs in April.

I normally hesitate to ask to take pictures with people I interview but there was no way I was going to miss out on a shot to make sure everyone knows I’m taller than The Mountain and possibly blow some minds in the process. 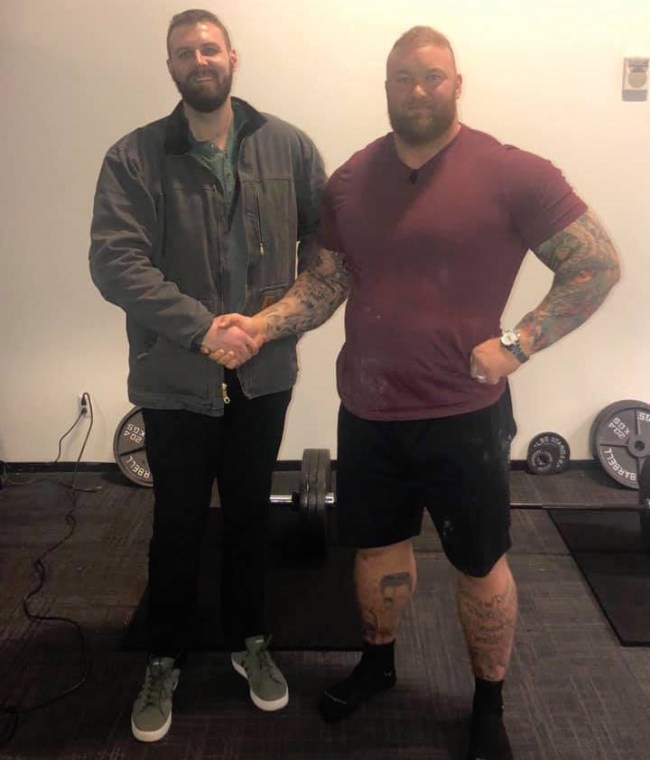 I swear those jeans make my calves look smaller than they really are.