YouTube’s ‘2018 Rewind’ Video Has Been Downvoted Over 7.4 Million Times, Has Over 1.4 Million Comments 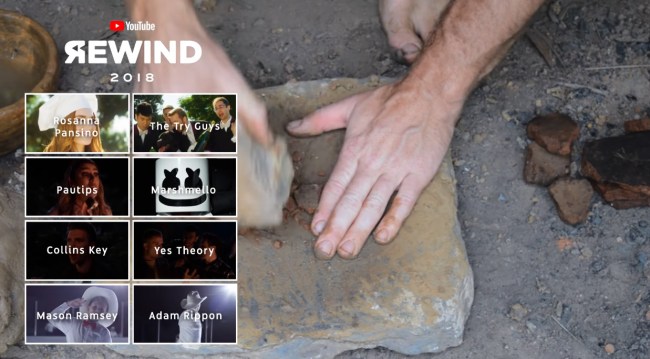 In the biggest sign of visceral dislike the internet has seen since Electronic Arts set a record for the most downvoted Reddit comment ever for their stance on Star Wars: Battlefront II, YouTube’s annual year-in-review video compilation, “2018 Rewind,” has been downvoted over 7.4 million times in just four days.

Now what could possibly be so bad about YouTube’s “2018 Rewind” video to warrant 7.4 million people hating it enough to downvote it? (It also has 2+ million upvotes, for whatever that’s worth.)

The latter of which posted a reaction video to the, uh, video, and said, “I remember ‘Rewind’ [used to be] something that seemed like an homage to the creators that year. It was something cool to be a part of. Now it’s like I’m almost glad I’m not in it, because it’s such a cringey video at this point. It’s so disconnected with the community and its creators.”

The most upvoted of the over 1.4 million comments on YouTube’s video, posted by Nina Thorén, stated, “Seriously YouTube, I feel like this is no longer a YOUTUBE rewind when you bring up stuff about what’s happening in the world and include talk show hosts. This video should be a representation of all the biggest events and youtubers on YOUTUBE during the year. Focus on the people who create content that made an impact this year and show that you appreciate them being on this platform. You don’t always have to have the same people in the video or the ones with the most subscribers. Instead show the ones that made a big impact this year on YouTube. I love that they include animators and youtubers from different countries more recently but they should also look back on previous rewinds and have more songs, more youtubers, more memorable moment and less talking.”

According to the BBC, YouTube’s “2018 Rewind” is the second most-disliked video in the history of the platform. Justin Bieber, natch, owns the top spot with more than 9.7 million downvotes for his 2010 song “Baby.”

Of note, it took Bieber eight years to achieve his lofty status, while YouTube has done it in less than a week. That’s a whole lot of hate.