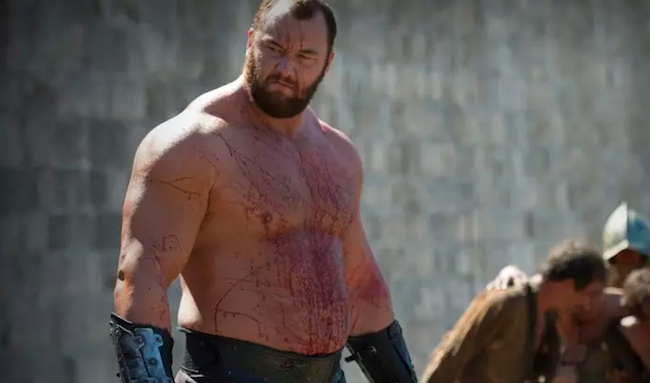 I’ve spent more time than anyone should watching people bowl, fish for bass, and rapidly cut logs with a chainsaw on ESPN 2, but back in its heyday, there was nothing I loved more than watching the World’s Strongest Man. I can’t say how glad I was to learn that a sport that involves lifting giant boulders, pulling a truck with a rope, and throwing kegs as high into the air as you can is a sport that exists in the world.

There was also a dude named Magnús Ver Magnússon, which might be the coolest name in the entire world. He ruled competitive lifting back in his day, but there have been plenty of guys with dope monikers who have taken up his torch since his retirement.

Hafthor Julius Bjornsson might sound like an Icelandic law firm,  but it’s actually the name the 400-pound man who’s probably best known for playing Gregor Clegane—AKA “The Mountain”— on Game of Thrones. The 6′ 9″ powerlifter set a world deadlifting record in March and followed up his achievement by taking home his first ever World’s Strongest Man title during the finals of the 2018 competition that took place in Manila over the weekend.

He dominated the first three events and had all but secured a victory by the time the atlas stones rolled around at the end of the competition on Sunday, and he took it fairly easy to conserve his energy for lifting the trophy in the air.

He hopped on Instagram after his win to show off his giant quads and thank his supporters and fellow competitors.

THE WORLD’S STRONGEST MAN 2018! 🥇🙏 . . Want to thank all of my family, friends and fans for supporting me along the way. . Special thanks to my coach @australianstrengthcoach and my nutritionist @stanefferding . . Also want to thank my sponsors, @kjotkompani @sbdapparel @roguefitness . . Congratulations to @kieliszkowskimateusz and @shawstrength for their second and third finishes! . #numberone

Bjornsson had earned a spot in the top three the past six times he took part in the event, but this is the first time he’s come away with the victory.