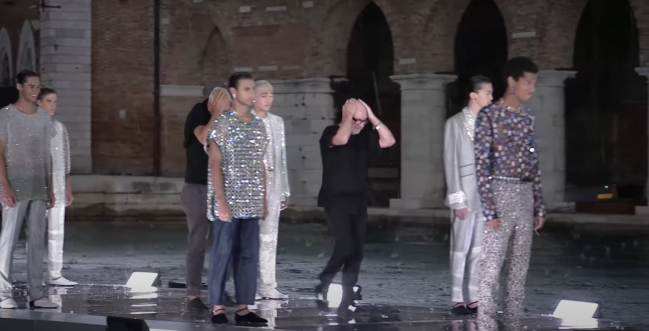 The Dolce & Gabbana Alta Sartoria runway show brought some of the biggest celebrities to Venice, Italy this week but mother nature did not spare them from chaos. From Jennifer Lopez to Kourtney Kardashian and Travis Scott, the night quickly turned from lavish to tumultuous when a freak hailstorm rained down on those in attendance.

Although the show was moved up by an hour with inclement weather in the forecast, it failed to help.

Video of the event shows the scenes as well-dressed fashion fanatics scatter like chaff before the wind. The hail looks pretty sizable and the shrieks are audible as people try to cover their heads with anything possible.

Entertainment executive Simon Huck documented the storm on Instagram and it was not just a little weather. It was a full-on hail storm that resulted in mayhem.

The models, however, did not seem phased. They pushed through as if there was not ice falling from the sky.

During the official livestream of the show, House designers Domenico Dolce and Stefano Gabbana walked through the hail during the finale. They can be seen at the 12:25 mark trying to cover their heads.

Despite the aftermath of the freak storm, Dolce & Gabbana shared images of the models embracing the weather and enjoying themselves.

The show ended up being a huge hit and the weather may have even gained Dolce & Gabbana more attention than it would have without the storm.