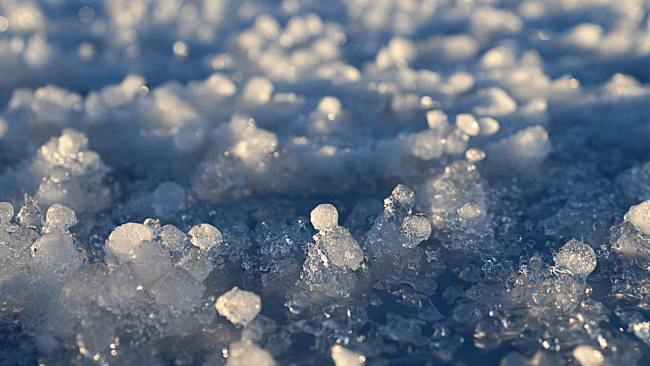 Videos of a enormous freak hailstorm in Mexico City shows streets being flooded and the city looking like it had been hit by a snow storm on Sunday.

Footage shows shoppers inside a store fleeing in fear as the ceiling of a supermarket collapsed due to the sheer amount of hail that had struck the building.

According to a report by the Mirror…

The collapse occurred at the Soriana department store, in Benito Juarez borough, in the Mexican capital Mexico City on Sunday June 12.

Officials said the ceiling gave way after a relentless storm of giant hailstones battered the store’s roof for 30 minutes.

Images from the scene show water flooding through the ceiling into the store’s technology and food departments.

At least 200 residents were forced to evacuate from their homes and a yellow alert was issued by authorities as the area was blanketed in hail stones.

One person was reportedly injured, suffering a fractured clavicle when the store’s roof collapsed. Another reportedly required medical attention after suffering an anxiety attack.

Santiago Taboada Cortina, the mayor of Benito Juarez, said, “It was a hailstorm that lasted almost 30 minutes, very intense, which caused the store roof to collapse.

“We arrived at the site, at Soriana in Mixcoac, and unfortunately a quarter of the store structure had collapsed due to the large quantity of hailstones that fell within minutes of the storm.

“We arrived and were practically the first to respond. The mayor’s office arrived at the first minute.”

The hailstorm also knocked down the roof of an auto repair shop, reports the Daily Mail.

Many on the internet could not believe that such a storm could hit Mexico City this time of year, but back in 2019 the city of Guadalajara was also struck by a freak hailstorm which caused tremendous damage.

This latest storm in Mexico City had many also questioning what would cause such a destructive weather anomaly to occur this time of year.

🇲🇽❄️I am stuck in traffic in the middle of a serious hail storm in Mexico City. There are a few inches of wet snow / sleet. Cars are stuck. Wheels spinning. pic.twitter.com/WgYMHnCg8d

Climate change is wild. We should probably do something about it.

Is it starting to feel like we’re in one of those disaster movies with Tommy Lee Jones or Bruce Willis?

Mexico City was hit by a freak hailstorm Sunday burying the city in many inches of hail. Up next, locusts….

Perhaps the fact that Mexico City is 7,349 feet above sea level had something to do with it?