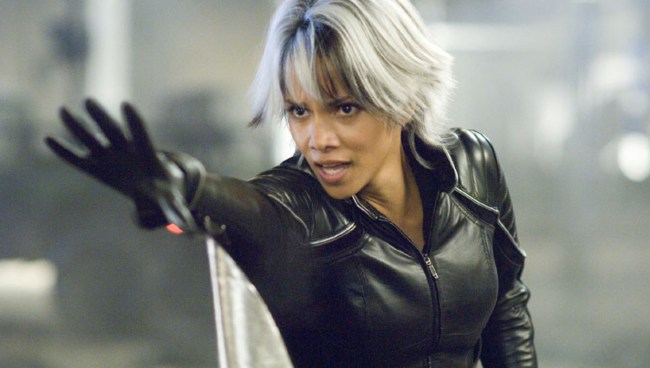 Hello! Hey now! Whoa there! Not your typical Friday news dump we got here, eh?

2000’s X-Men, which has popped back up into the pop-cultural consciousness recently as it celebrates its 20-year-anniversary, has long been credited with ushering in the modern age of superhero movies. And while that legacy may ultimately stand the test of time, its reputation will not, as the film’s director, Bryan Singer, has since been muddled in a bevy of controversies, including sexual abuse.

Due to the upcoming anniversary, outlets such as Observer and The Hollywood Reporter have been publishing retrospectives about the film, with the latest coming from THR this morning. While the entire feature is a frankly fascinating read — as it highlights just how much the industry of comic book filmmaking has changed in the last two decades — there’s one particular section that caught my eye: a quick blurb that makes mention of Academy Award-winner Halle Berry telling Singer to, and I quote, “kiss her black ass”. Where do I sign up, Halle?

It’s important to remember that at the time X-Men was being filmed, Berry wasn’t yet the bankable star that she’d come to be, meaning her outburst at Singer was unleashed without any substantial leverage. Nevertheless, as THR tells it, Berry was so enraged with how Singer handled a botched stunt scene with Hugh Jackman that she let him have it all the same.

Singer’s behavior grew erratic and destructive, culminating in a fight between the director and DeSanto that shut down production. Sources who were present say DeSanto attempted to halt shooting when he learned that Singer was incapacitated after taking a narcotic. Some crewmembers had taken the same drug, and DeSanto became fearful that someone on set could be injured.

All of the main cast, with the exception of McKellen, were in the scene that day, which takes place in the X Jet and comes near the end of the movie. But Singer was defiant and continued shooting, leading to a botched stunt that left Jackman bleeding on camera (no stunt coordinator was present because the scene was supposed to be shot the following day).

Winter, the X-Men producer who had the authority to stop production, did so. But the next day, the studio appeared to side with Singer and told DeSanto to return to Los Angeles. That prompted the main castmembers, minus McKellen and Romijn — all dressed in their full X-Men costumes — to converge in Singer’s trailer and confront him, threatening to quit if DeSanto left. That’s when Berry famously said to Singer, “You can kiss my Black ass,” a line that has been oft-reported in the years since but never with the correct backstory. [via THR]

Despite his on-set unprofessionalism, Singer not only got X-Men over the line, effectively reshaping Hollywood, but he was brought back to direct the sequel, X-2: X-Men United, which is a superior film in my opinion, and X-Men: Days of Future Past over a decade later.

As for Berry, her consecutive appearances in X-Men, Swordfish, Monster’s Ball, and Die Another Day would launch her into the stratosphere of Hollywood. Given what’s come of Singer in the years since — his Wikipedia page has four separate sections about his sexual abuse allegations — it’s clear that Berry knew what she was talking about all along. Hell yeah, Halle.