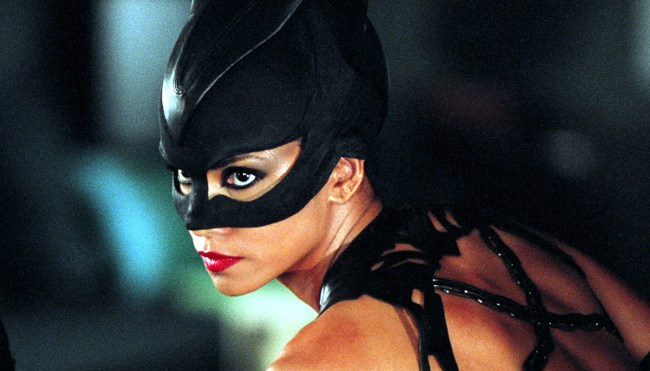 Halle Berry kicked off the new millennium with a bang, as she earned the trophy for Best Actress at the Academy Awards for her performance in Monster’s Ball, snagged a coveted spot as “The Bond Girl” in Die Another Day, and secured a major role as Storm in the X-Men franchise over the course of just a few years.

However, things came to a screeching halt in 2004 when she turned her attention to another superhero movie: Catwoman, the box office bomb that sports a 9% rating on Rotten Tomatoes and the infamous basketball scene that really tells you all you need to know about why that was the case.

Her role in Catwoman was enough to garner her a nomination at a slightly less prestigious show: the Golden Raspberry Awards (familiarly referred to as “The Razzies”).

Despite the best (or worst) efforts of fellow nominees including Hilary Duff, the Olsen Twins, and the Wayans Brothers, Berry was dubbed the year’s Worst Actress and joined Paul Verhoeven and Tom Green as the third person to accept the trophy in person (which she did while holding her Oscar in a truly amazing self-deprecating flex).

It’s safe to assume Berry has her Academy Award proudly displayed somewhere in her house, but as she revealed during a recent interview with Vanity Fair, the same cannot be said for the Razzie that apparently met a fiery end at some point after she accepted it.

Here’s what she had to say about her decision to attend the ceremony and the aftermath courtesy of The Hollywood Reporter:

“I went to the Razzies because I feel like we all take ourselves so seriously. If we get an award, if we get the Oscar, we somehow are made to feel like we’re somehow better than everybody else, but we’re really not. You were just chosen that year by your peers, and you were acknowledged for doing what they considered stellar work…

I had a great time and then I set that thing on fire.”