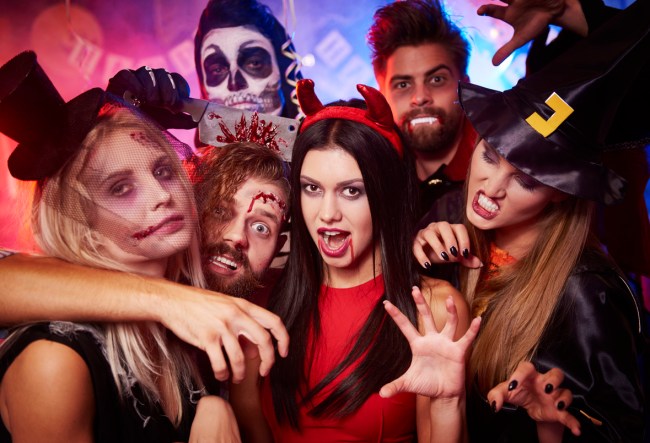 Every time October has rolled around in recent years, we’ve come to expect at least a few stories about people who caught some heat courtesy of an ill-advised Halloween costume, as there are still plenty of members of the public out there who haven’t gotten the memo that blackface isn’t a requirement if you want to masquerade as someone who happens to be a different race than you are.

Of course, that particular costume category is just one of the many kinds classified as “offensive,” a group that has expanded a great deal as society has become increasingly concerned with issues surrounding race and cultural appropriation. There are plenty of people out there who will point to this trend as “political correctness gone mad,” and even though some of those who’ve fallen victim to an outfit they didn’t think all the way through may have not intended to offend, none of this cancels out the reality that the list of “banned” costumes seems to grow with every year that passes.

I personally don’t feel like I’m in a position to make snap judgments concerning which ones should be essentially outlawed, as the definition of “poor taste” is a fairly subjective one. Sure, there might be certain things I think are objectively offensive, but at the same time, a quick look at Twitter would prove that is not the case.

Halloween might not really be as much of a thing this year as it usually is, but with that said, I still want to jump on the bandwagon (or perhaps I should say “banned-wagon”) and turn my attention to the kinds of costumes that offend me to my core based on nothing else but their inherent hackniness.

The Halloween season is a great time to let your originality shine, but at the end of the day, not everyone has enough creative juices flowing through them to hold their own. In a perfect world, those people would simply sit this holiday out and save their celebratory spirit for occasions commemorating the American flag, the Earth, or a groundhog in Pennsylvania, but sadly, that’s often not the case.

I’ve had just about enough of this hackitude, and as the self-appointed Czar of Halloween Costumes, I think that this problem could be solved with a simple, nationwide moratorium on six particular types of costumes that may not cross any real lines but still need to get the “canceled” treatment.

This category of costume requires more creativity than the others we’ll get to in a bit, but that’s only because everything else on this list has a net creativity score of zero.

We’ve all encountered these; a “Cereal Killer” costume that consists of a bloody shirt with Rice Krispies glued to it or the “Fork In The Road” option that’s nothing but a black tee with a yellow stripe down the middle and a pronged utensil taped to it. If you decide to go this route, the best-case scenario is eliciting a good-natured chuckle from someone else. You’re never going to get a genuine guffaw or an instinctive knee-slap because the raison d’etre of puns is to provide mild amusement. That’s it.

These costumes might not make the world actively worse, and I guess if someone really wants to put in the effort required to construct one even though the returns will never justify the time they invested, that’s on them. However, if your end goal is to induce some groans with some terrible humor, it’s much easier to throw on a polo, tuck it into a pair of light blue jeans, lace up some chunky white sneakers, and study up on the jokes you’d someone expect going as a “Dad” to make—which is fairly low effort but still leaps and bounds above the next offender on the list

Ironic costumes are the deadbeat cousin of pun costumes, as the only work required is the ability to order a shirt online that says “This Is My Costume” or “My Costume Is At The Cleaners” (which, in fairness, is still an improvement compared to the people who throw on whatever they want and say they’re “Someone At A Halloween Party”).

We get it. You’re too cool to care. You could get away with this if we still lived in a world where getting a tattoo of a mustache on your index finger was viewed as hilarious, but we don’t. Irony is dead and these costumes need to get the death sentence.

I lump people who go with these in the same group as those who dress normally aside from one item they obviously randomly picked out at an old Circuit City that’s converted into a Halloween store for 31 days every year. Are you really going to tell me you cared enough to buy a cape but couldn’t bother to procure a set of Dracula teeth to complete the look?

An “Undead” Version Of Anything

There are a number of usual suspects you can expect to find at your typical Halloween gathering; tried-and-true classics like mummies, ghosts, and zombies—the last of which seem to have taken on a life of their own (I promise you I was not trying to be punny or ironic when I typed the last few words of that sentence).

People who pride themselves on their “edginess” have always gravitated toward costumes inspired by pop culture figures who died in some unfortunate manner, and while those could be viewed as offensive, I’m just as offended by people who feel the need to give an already adequate costume the “undead” treatment.

A lot of the time, these are partygoers who felt like they had to elevate a generic but acceptable costume by throwing on some grey face paint as if “Zombie Cheerleader” or “Zombie Elvis” is somehow a huge improvement over the original.  It’s not, and it’s ruining Halloween as much as the people who convinced parents they need to check their kids’ candy for razor blades and make sure there are no weed gummies in their bag as if someone would give away perfectly good edibles for free.

It seems to me that this entire trend came about because a lot of people abide by an unwritten and non-existent rule that Halloween costumes have to be “scary.” They don’t. If you want to do a “scary” Elvis, just Google how he looked at toward the end of his life. There’s no zombie makeup in the world that’s more terrifying than that.

Like Van Halen’s “Ice Cream Man,” this one goes out to the ladies.

If you ever find yourself in a position where your life depends on correctly guessing a random woman’s Halloween costume sight unseen, I’d estimate that you’d have around a 65% chance of seeing November 1st if you go with “black cat” (there’s around a 25% chance it’s Wonder Woman, but when it comes to the remaining 10%, you’re on your own).

Black cats are one of the most iconic Halloween symbols but the same can be said for skeletons, ghouls, and large orange gourds. However, for some reason, these felines seem to be the ones the fairer sex gravitates to more than any other. At the risk of getting hit with “mansplaining” accusations, may I suggest giving some other cats some love? It’s about time ocelots got the respect they deserve.

That won’t do much to help to avoid the “catfight” joke the guy in the “Ceiling Fan” pun costume will inevitably deploy if two women dressed as members of the same species get into it after getting overserved at the office Halloween party but at least it would be a start.

In 2017, I took a trip to the Star Wars Celebration in Orlando to study the nerd in its natural habitat. In addition to seeing Darth Maul ordering a personal pizza and Anthony Daniels from a football field away, I observed hundreds of people dressed as characters spawned from the mind of George Lucas (and one guy dressed as The Mad Hatter from Tim Burton’s Alice in Wonderland holding a lightsaber. I still have no clue what that was about).

Most of these costumes were really impressive and looked nearly identical to their silver screen counterparts, but among the throngs of people celebrating the franchise (many of whom would change their tune when The Last Jedi came out a few months later) were way too many Hawaiin-shirted stormtroopers.

The thing that bothered me about these guys is the look of smugness I imagined they exuded when they looked in the mirror that morning thinking they were about to blow the doors off the Orange County Convention Center and become the belle of the nerd ball by pairing a helmet with a Tommy Bahama shirt. The same could be said for the fellas who tried to squeeze into their prom/bar mitzvah/untimely funeral suits and paired those with a screen-accurate lid.

You see this sort of thing all the time and I can’t figure out what the draw is—no, wait; I can: it’s another easily cobbled-together costume for the lazy.

Evil clown costumes are a Halloween classic that plays off of humanity’s primal fears of greasepaint and slapstick comedy. I thought we might finally put them behind us after the Evil Clown Scare of 2016 but then IT came out the next year and made them hip again (part of me feels that trend was actually a viral marketing stunt to drum up excitement for the movie—even though it wouldn’t come out until the following September—but in reality, it was probably the result of people living in a small town who got tired of tipping cows and destroying mailboxes with baseball bats).

If there’s one thing I know about economics (and I genuinely only know one thing about economics) it’s supply and demand. Our supply of evil clown costumes is far outweighing the demand, and if we take a break from them, we can stabilize the evil clown economy once and for all.

On a related note, I think the same steps must be taken regarding Heath Ledger Joker costumes. Every weird kid whose good side you tried to stay on in high school somehow still loves them (although many of them have gravitated to the “damaged” Jared Leto version) but it’s time to let it go. Let’s give Joaquin Phoenix’s a shot or (even better) give Cesar Romero’s interpretation from the old Batman show some love. At this point, there’s nowhere to go but up.