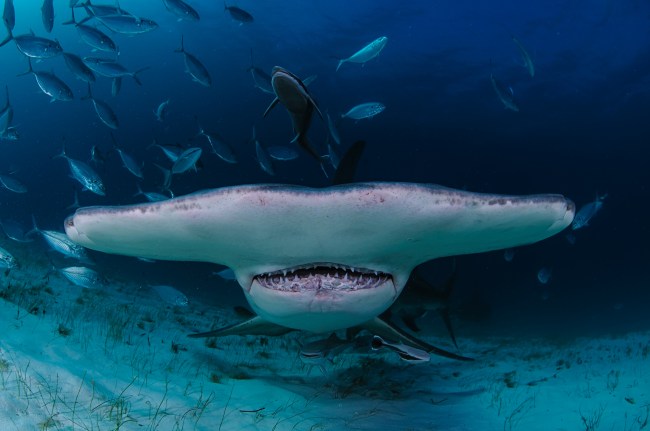 I certainly don’t have a fear of the unknown. Not at all. I didn’t get freaked out swimming in lakes as a kid because I couldn’t see what was down in the deep dark water. And diving in murky saltwater with only a few feet of visibility doesn’t give me the sweats thinking that a Bull Shark could pop up at any second and I wouldn’t know until it was too late.

This water in Miami Beach was actually quite clear. It’s that greenish Florida water you often see right off the beach. And the footage from Miami resident and drone photographer Jason McIntosh shows the large hammerhead shark curiously swimming right underneath the guy in the water.

According to WSVN, this was just 25-feet off the beach near Fourth and Fifth Streets in Miami Beach. It’s common for sharks to show up all over Florida throughout the year but I tend to associate Hammerhead Sharks with tarpon cruising up and down the coastlines because Tarpon are like Catnip for Hammerheads, they go wild for that fish. Anyway, here’s the chilling footage of the shark via @jasonmac7’s Instagram:

If that Instagram embed isn’t loading for you then you can check it out here on @jasonmac7’s page. By the way, this hammerhead footage below from BlacktipH was filmed just three short months ago so it’s not as if the sharks aren’t there all the time…they are.

For anyone who hasn’t been to Florida in recent months and are wondering if the beaches are less packed because of the global health catastrophe? Nah. They’re super packed. I went to Siesta Key’s main beach on Saturday and it was absolutely slammed to the point that people weren’t able to find parking.

I can’t speak to how busy the beaches are in Miami Beach but after Florida’s Governor Ron DeSantis essentially handcuffed every city/county with an executive order in September preventing them from enforcing local restritoins it’s as if most of the state’s gone back to wearing a blindfold and living a normal life.