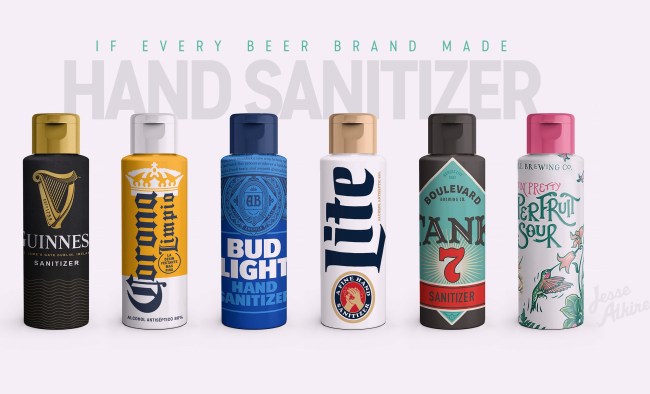 Today’s the first day in weeks that I haven’t used hand sanitizer. But that’s only because it’s the literal ass crack of dawn here and I’ve barely woken up yet.

If we’re being honest here, I’m actually running a little low on hand sanitizer because the last few weeks every time I’ve tried to buy some it’s been sold out. The people down here in Florida have been wildin’ out with hoarding supplies. My dad only just found toilet paper and paper towels yesterday after Publix has been sold out for two weeks! But I’m getting off-topic here. I guess that’s what happens when I try and get things going this early in the morning.

Jesse Alkire (@JesseAlkire on Twitter) is using his downtime right now to imagine what life would look like if every major beer company made hand sanitizer right now instead of beer. I’d throw some serious $$$$ at these if they were real but sadly they’re just mockups for now.

What if every beer brand started making hand sanitizer? (A thread) pic.twitter.com/5VvWDsqZ93

For real though, let’s make some of these happen. To all of the beer companies reading this, and I know you are, let’s get to work on these and hook up Jesse with some design $$$ in the process?