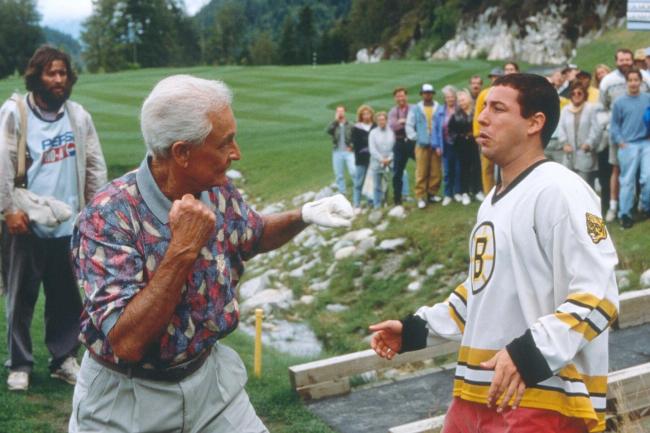 In the last 25 years, one of the most outlandish scenes in a comedic movie has been the fight scene between Adam Sandler and Bob Barker in the Happy Gilmore. However, that iconic scene almost never happened because the Sandman was eyeing a different quintessential TV personality.

“Well, [Tim] Herlihy initially wrote Ed McMahon,” Sandler told Dan Patrick. “I remember being so young and cocky then that we would literally say when we sent it to Ed McMahon, we thought, ‘Of course he’s going to do it. It would be good for him. It’d be good for his career to be in a movie with me and get in a fistfight.’”

However, Ed McMahon was so not interested in the opportunity that he never actually responded to Sandler’s offer to be in the movie.

As luck would have it, the producers were able to get Bob Barker to appear in the comedy as McMahon’s replacement. The script called for Happy Gilmore to win the fight, but Barker only agreed to star in the 1996 film if he won the golf course throwdown.

The Price is Right host was eager to for the fight scene because he was going to train for the combat with his next-door neighbor…Chuck Norris. “We trained every night,” Barker told Sandler while filming. “He helps me with my punches and my kicks, but I have to win this fight,” Barker said.

Gilmore’s “The price is wrong, b*tch,” line reportedly was written by comedic director Judd Apatow, who was Sandler’s Los Angeles roommate. “Judd came up to Vancouver and did a couple of months of jamming with us,” Sandler told Patrick.