How Does Kit Harington Feel About Critics Of ‘Game Of Thrones’ Season Eight? ‘They Can Go F**k Themselves’ 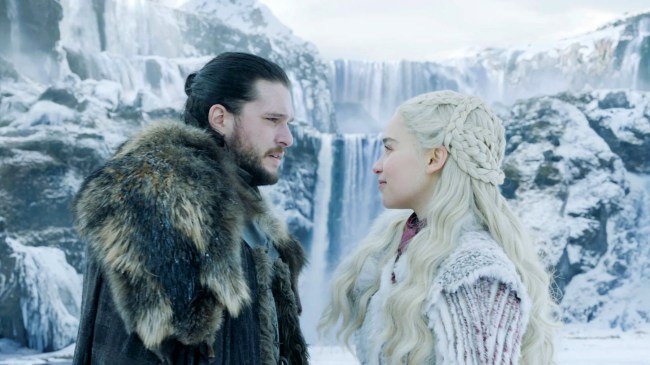 Did you hear? Season eight of Game of Thrones premiered Sunday night? I thought, you know, what with Tiger Woods winning the Masters and the NHL and NBA Playoffs and all that you might have missed it. Ha! I kid.

So, did you like the first episode? One of our writers here who shall remain nameless said about the premiere, “Nothing happened last night. It was like 60 minutes of people staring side-eye at each other.”

If you fall into that camp and were less than happy with what you watched, Kit Harington, aka Jon Snow, has officially let it be known that he really doesn’t give a f**k.

Those are the exact words he used in an interview for Esquire’s May cover story.

Now if people feel let down by it, I don’t give a f**k — because everyone tried their hardest. That’s how I feel. In the end, no one’s bigger fans of the show than we are, and we’re kind of doing it for ourselves. That’s all we could do, really. And I was just happy we got to the end.

You hear that all you negative nellies?! Jon Snow is not down with your complaints!

On the more positive side of things, Harington also gave 60 Minutes a tour around the set of home to the Night’s Watch, Castle Black, prior to the season eight premiere, which was nice.

“It’s incredibly weird walking around as Kit, having done every inch of this as Jon Snow,” Harington told Anderson Cooper as they traversed the amazingly realistic set. “These steps I’ve walked down a hundred times.”

“You feel like this is an actual castle that’s been around for hundreds of years,” added Cooper.

Read the rest of Harington’s interview over at Esquire.com.