Harvard Professor Says Coconut Oil Is Like ‘Pure Poison’: ‘One Of The Worst Foods You Can Eat’ 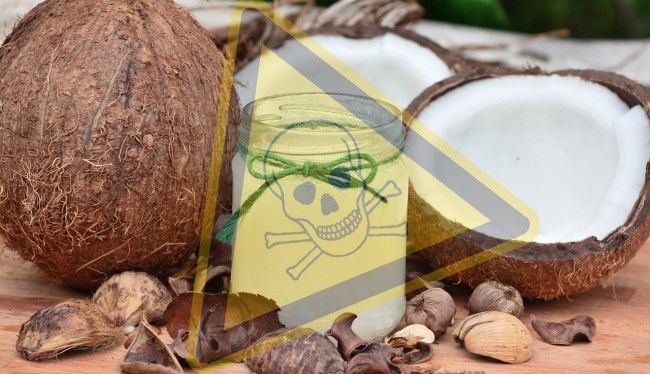 A Harvard professor has contradicted the praise for coconut oil’s health benefits as a “superfood” calling it “pure poison” and “one of the worst foods you can eat.”

Michels, however, took things a step further, saying coconut oil is “more dangerous than lard” because it almost exclusively contains saturated fatty acids that can clog the coronary arteries, according to Business Insider.

While Michels doesn’t describe other “superfoods” like acai, chia seeds, or matcha as harmful, at most she considers them ineffective because, in most cases, the nutrients they’re touted for are available just as readily in other foods that are more easily accessible such as carrots, cherries, and apricots.

“We are well and sufficiently supplied,” she said.

“There are many claims being made about coconut oil being wonderful for lots of different things, but we really don’t have any evidence of long-term health benefits,” Dr. Willett told CNN.

“It’s probably not quite as ‘bad’ as butter but not as good as extra virgin olive oil,” said Kevin Klatt, a molecular nutrition researcher at Cornell University who is studying the metabolic effects of coconut oil.

Klatt also pointed out, not surprisingly, that more research is still needed.

“You can’t infer from … studies what coconut oil will and will not do. We need better controlled trials,” said Klatt. “Right now, the internet is jumping the gun and going way beyond the evidence.”

The internet? Jumping the gun? No way.

If both the American Heart Association and a Harvard professor tell you coconut oil is bad for you, rest assured it's one of the best things for you.

Here’s Michels’ entire lecture (in German) called “Coconut Oil and other Nutritional Errors” which has now been viewed almost one million times.