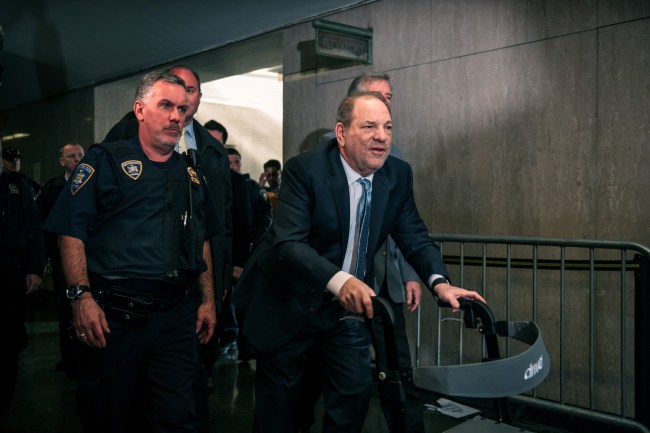 As my ingenious co-worker Connor put it, “You HATE to not be able to see it” — according to reports, convicted sex offender Harvey Weinstein is quite literally falling apart in prison.

Over the weekend, it was reported that Weinstein was “secretly” indicted on rape charges by a grand jury in Los Angeles.

As a result of that indictment, Los Angeles prosecutors are seeking to extradite Weinstein from New York to Los Angeles to have him stand trial for the 11 charges against him, however, the extradition process has been delayed multiple times due to the COVID pandemic. And if Weinstein’s attorney gets his way, that will continue to be the case.

Norman Effman, a New York lawyer representing Weinstein, is fighting to keep Weinstein in New York due to what Effman claims is his rapidly declining state of health — apparently, Weinstein has had four teeth removed, is experiencing cardiac issues, back issues, sleep issues, and is going blind.

“We know where he is,” Effman said. “He’s not going anywhere.”

Effman also argued that Weinstein is suffering from a variety of medical problems, which require extensive treatments. He said that Weinstein has from dental problems, and has had four teeth removed. Effman said he is also experiencing cardiac issues, back issues, sleep apnea, and is nearly legally blind. [via Variety]

Last year, Weinstein, now 69-years-old, was found guilty of two charges of rape and was sentenced to 23 years in prison. Currently serving his time at the maximum-security Wende Correctional Facility in New York State, Weinstein’s earliest possible release date is November 9, 2039, when he will be 87 years old. This is, however, not counting the pending court cases in Los Angeles, where Weinstein faces 11 charges that could result in up to 140 years in prison. Regardless of how those charges ultimately wind up, Weinstein will still have to return to New York to complete his 23-year-sentence, which he is currently in the process of appealing.