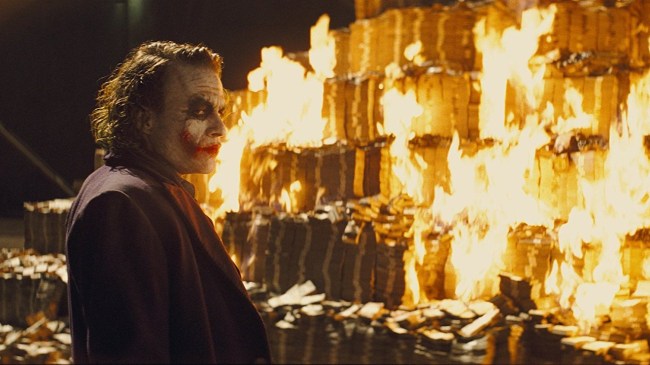 This past Sunday, I was going through a hell of a battle with the hangover gods. At 26-years-old, my body just doesn’t handle alcohol the same way it did when I was 21. Hell, even when I was 24 — the body changes so rapidly, and at this age, going out on a Saturday night with my buddies means being hungover for at least one-and-a-half days.

Anyway, there I was on Sunday, bed-ridden with a vape pen, scrolling through Netflix trying to find something to watch. And similar to the comfort of fried chicken and mac and cheese, I ultimately landed on the soul food of movies: The Dark Knight.

And while everything from the cinematography to the score to the writing is pitch-perfect, the element of the film that places The Dark Knight on the mountaintop of cinema is the performance of Heath Ledger as the Joker. Now, that performance has been officially recognized by the fans as the greatest movie moment of the last two decades.

In celebration of their 21st anniversary, Rotten Tomatoes asked their fans to name the single most memorable movie moment of the past 21 years, and Ledger’s performance as the Joker won by a “serious margin”.

The specific moment we focused on was the moment we first saw Heath Ledger as the Joker, not in the actual film, but in the pre-release marketing: it was a game-changing image release that turned the tide in fan sentiment about Ledger’s casting and gave us our first indication of how incredible, and incredibly dark, Ledger’s take on the character would be. In our video, makeup artist John Caglione Jr. and Susan Bonds, CEO of 42 Entertainment, break down how the Joker’s look was created and how they first shared it with the world,” explained Rotten Tomatoes.

In a sense though, Ledger’s entire performance was a “moment” – one that changed the course of what people thought possible in superhero films and one that remains the benchmark against which all movie villains are compared to this day. It was bigger than a single scene, or a single line, or a look, or a bit of action – which is why we titled the moment simply, “The Joker.” And it seems fans agreed, if the results of our poll are anything to go by.

It truly is a testament to Ledger that even 11 years after the film was released, fans are still utterly enthralled by his iconic performance.