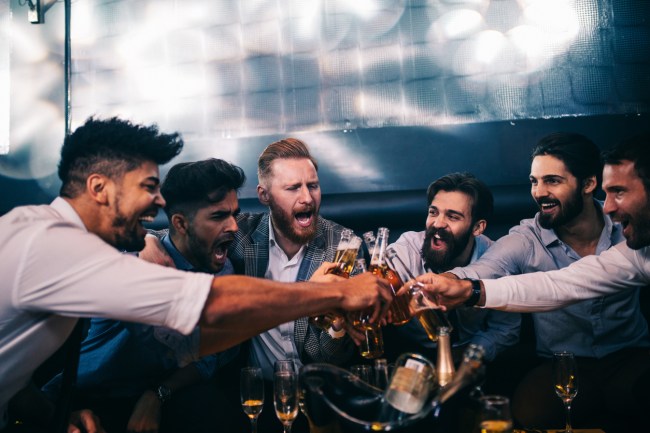 Well, all of us boozehounds are destined to die a painful, miserable death. Condolences. It seems that while many of us, these days, are laying off the Taco Bell, consuming more fruits and vegetables, exercising more, cutting back on the smokes and even switching to beer with lower calories and less alcohol content, none of this petty nonsense really matters. Regardless of our diets and seemingly good intentions, we are all doomed to be snuffed out by cancer unless we eliminate booze from the equation altogether. This heavy bag of dicks is what a team of scientific buzz kills at Queen’s University Belfast has just handed us via the well respected medical journal PLOS Medicine.

Although the occasional cocktail has been shown to have some therapeutic benefits, like promoting heart health, researchers have found that consuming anymore than five drinks a week drastically increases a person’s risk of developing cancer and ending up on a cold slab down at the local morgue. Five measly drinks over the course of seven days.

Listen, most of you reading this article do not imbibe lightly, and that includes me – the author — the guy who has always considered himself more of a drinker than a writer. We are a special class of degenerate that can, and typically do, knock back five brews just to get a bite on the evening. So, it is a bit alarming to hear that a lifetime of drunken shenanigans appears to have a definitive nail-in-coffin consequence. Sure, kicking around in an inebriated lifestyle has been known to cause the occasional car crash, cirrhosis of the liver and even Alzheimer’s disease. But cancer?

Okay doc, give it to me straight. How much time do we have before the hammer comes down?

Here’s the rub. All of the 100,000 study respondents were in their mid-50s to early 70s when researchers began the examination. The work carried on for around a decade, after which the team found that, lo and behold, the subjects who had been boozing-it-up the most over the years not only had more cancer, but they were also less likely to survive it.

This mean that some of these booze-soaked guinea pigs were dropping dead somewhere in their middle 60s to early 80s – just about the time when a man’s mind starts to slip and he find himself in diapers or getting fitted for a colostomy bag. In other words, the cancer stemming from years of hardcore drinking does not appear to show up until much later in life. Chances are most of us, at least those bold enough to really show the world how it’s done, will be riddled with so much guilt and regret by then that we’ll welcome a tumor with open arms.

But for those of you frightened by the possibility of being sent to your deathbeds a six-pack at a time, researchers claim that all a drinker needs to do to live longer is cut back – and significantly.

The study finds that the risk of death was lowest in those people who consumed only 0.5 drinks per day. This means if you can make a single 12-ounce beer last two days, you’ve got in made in the shade. If you are presently staring at your computer screen, like how in the holy hell does a person only have half a drink, welcome to “we’re fucked” club.

Alcohol is the third highest risk factor for cancer. This is the bad news. The good news is there are two other factors that are higher – smoking and obesity. In truth, only about 5 percent of cancer is alcohol-related. Considering that more than 1.7 million new cases of this foul disease are diagnosed in the United States every year, roughly only 86,000 are getting booze cancer. If these numbers seem horrifying, our advice is to trade in the bottle for bud. There is not any evidence that marijuana causes cancer.

Don’t let this study get you down. In spite of the science, all of us have an obligation to live our lives – drunk, sober — it does not matter. I think it was Gandhi who said, “Live as if you were to die tomorrow,” which, when translated to Bro speak means: Go ahead, do all of the shots, drink all of the beers, party as much as you can, while you can, goddamnit, because none of us sloppy, drunken bastards are getting out of this world alive.