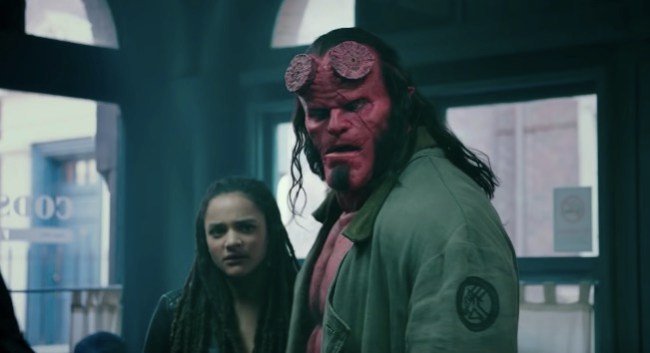 The first trailer for Hellboy (2019) starring David Harbour and Milla Jovovich just dropped and I have to say that I’m pretty damn stoked for this.

For starters, I loved the original Hellboy character and the subsequent movies from director Guillermo Del Toro starring Ron Perlman. Add to the fact that David Harbour is pretty much flawless on Netflix’s Stranger Things and it’s a pretty safe assumption that this movie is going to be awesome.

I listened to David Harbour a while back on Marc Maron’s WTF Podcast and Harbour opened up about this Hellboy project a little. He talked about how Ron Perlman basically took him out to dinner at a swanky restaurant to give him his blessing to play the Hellboy character because it’s almost impossible to believe that anyone could be a better Hellboy than Ron.

It’s obvious that this is a full-blown reboot from the beginning. The cool London touches with St. Paul’s and a local chips shop. They’ve also gone much grittier with David Harbour’s look. Hellboy has the appearance of someone who just lost a bar fight.

This film is set to hit theaters on April 12, 2019 so we’re all but certain to see a ton of trailers between now and then but it’s at least nice to get this first one out there so we can at least have some idea of what the film will look like, and as of now it appears as if this is going to be great.