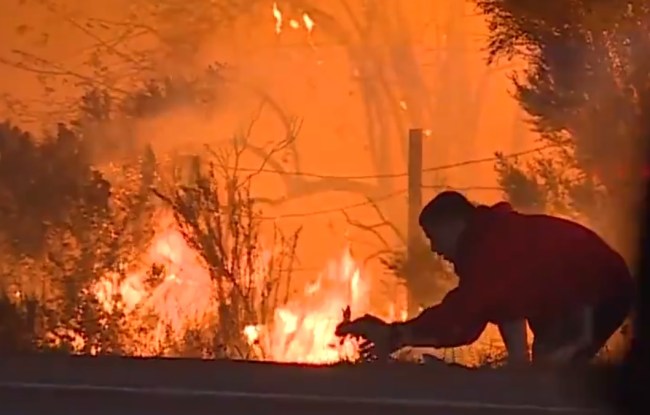 The wildfires ravaging southern California have created for some Hell-on-Earth-type videos. But on Thursday there was a video that showed the humanity that can arise from such a dire life-threatening situation. A heartwarming video of a man saving a rabbit from the dangerous California fires has gone viral for all the right reasons.

The brave man has become an internet hero after video caught him risking injury and coming dangerously close to the inferno in an effort to save the helpless rabbit. The unidentified man pulled over on Highway 1 in southern California as fires burned all around him. He got out of his vehicle to rescue the terrified animal. He scooped up the rabbit and transported it to a safer spot that didn’t have burning brush. The people who recorded the video said the hero declined to be interviewed on camera.

Witnesses say this man pulled over to save a wild rabbit from flames along Highway 1 in Southern California as the massive #ThomasFire spreads toward Santa Barbara County. https://t.co/gGqzZlGfqT pic.twitter.com/3MT8IvV91d

Besides the rabbit, there are also plenty of human beings who are suffering from the wildfires. Officials project that 4,600 people have been affected by the fire and 1,300 homes were evacuated. The fires are being fueled by the tinder-dry conditions and powerful near hurricane-force wind gusts of up to 80 mph have helped rapidly spread the fires and made the blaze unpredictable. The inferno forced officials to temporarily close down part of Interstate 405, which is a key north-south roadway. One fire encompassed 450-acres and burned several multimillion-dollar mansions and threatened the Getty Center arts complex and its priceless collection. California Gov. Jerry Brown declared a state of emergency on Wednesday as the area has turned into Hell.

The blaze is so massive that it can even be seen from space and the International Space Station shared photos.

Expedition 53 @NASA_Astronauts aboard the International Space Station took these photos of the California wildfires in the Los Angeles area the week of December 4, 2017. pic.twitter.com/9XNGQFWCtJ

There is also photos of the Thomas Fire from NASA from satellites and from aircraft at about 65,000-feet in the air.

Look at all of that #smoke! That what the #Thomas #Fire looks like from space. Credit: #NASA #Earth Observatory #ThomasFire pic.twitter.com/rJvi549aWC