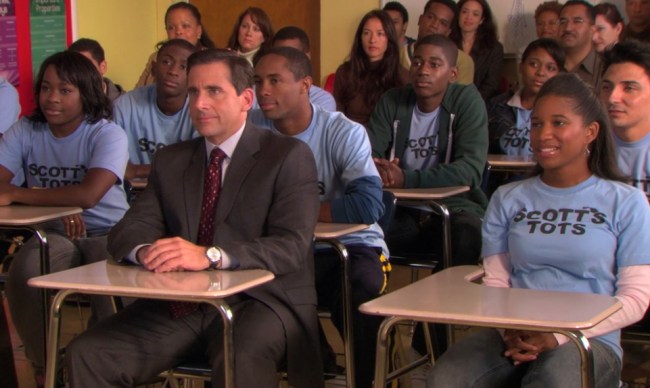 The Office is an infinitely rewatchable show that’s also incredibly hard to watch at times thanks to the cringeworthy antics of Michael Scott, who is the human personification of a flaming car wreck on the side of the highway that you can’t help but stop to gawk at.

There are no shortage of characters on The Office the average viewer can empathize with and I don’t know if I’ve ever felt more truly terrible for any fictional character in history than I did when Kevin spilled his Famous Chili onto the carpet after the ingredients spent an entire night getting to know each other in the pot.

Michael is an interesting case, because even though you can’t help but feel bad for him on countless occasions, he is more often than not the person who brought the troubles he’s forced to deal with on himself, which brings us to what may be the most uncomfortable episode of television ever produced: “Scott’s Tots.”

In the sixth season of The Office, Michael is confronted with the cold reality that he failed to become the wealthy paper magnate he thought he’d be ten years after he told a group of students he’d pay for their college education if they managed to graduate from high school. After attending a ceremony in his honor, he’s forced to break the bad news and offers each of them a lithium battery as consolation.

It’s a truly unbearable few minutes of television but viewers can find some comfort in knowing it was entirely fictional. Sadly, the same can’t be said for a high school student in Florida who’s currently dealing with a “Scott’s Tots” situation of her own.

According to WSVN, Ynette Lopez was in kindergarten when she signed a contract with the I Have A Dream Foundation that said she’d receive $12,000 over the course of four years if she decided to pursue a degree at a college in Florida.

When Ynette was in middle school, she moved to another town in the state due in part to the educational opportunities available to her there but her mother was assured she’d still be eligible for the promised scholarship even if they relocated.

Ynette is now a senior in high school, and after recently inquiring about the money she’d earned, she was informed she no longer qualified for it, with one person at the organization telling her she’d lost her eligibility by moving and another claiming she’d failed to meet the requirements outlined in the contract she agreed to.

Interestingly enough, Ynette is one of 21 students who moved away from the original area but is reportedly the only one who’s been stiffed for deciding to do so. She says she’s still applying for scholarships at other schools, and while she could take the case to court, an expert interviewed by WSVN says the case is a bit murky from a legal standpoint.

I sincerely hope she ends up getting what she appears to deserve, but at the very least, I hope they cut her a check for some books with the qualifier that she has to call them before she cashes it.